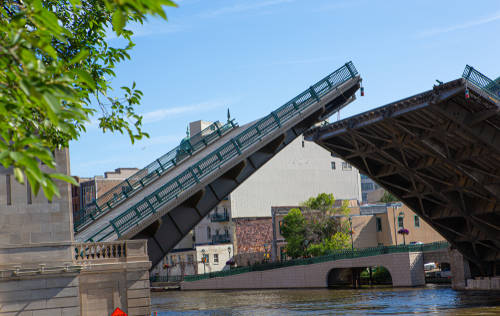 On Monday, August 15, A 77-year-old man, Richard Dujardin, fell to his death after crossing the Kilbourn Avenue Drawbridge in Milwaukee, WI.  As Dujardin was crossing the bridge, it began to open.  The Milwaukee River Camera shows that he made it about halfway across.  His wife, Rosemarie Dujardin, was close by as she crossed the bridge shortly before and was already on the other side as it began to open.

According to the medical examiner’s report, “The lights, bells, and arms came down at each end of the bridge however, Richard was hard of hearing, and it is thought that he didn’t notice them,”

He was able to grab onto a rail but eventually lost his grip and fell to the pavement below.  He suffered a fatal head injury and was pronounced dead at the scene.

A native of Providence, Rhode Island, he and his wife were visiting Wisconsin and, according to Dujardin’s obituary, were headed to mass at the time of the incident. Dujardin was a retired journalist for The Providence Journal in Rhode Island.  He was a devout catholic and leaves his wife of 54 years and their six children and grandchildren.

He was remembered for many things, one being a devoted father.  His son, in an interview, stated: “He really loved my mom. The last thing he said to me was that my mom was a hero,”  In the same interview, his daughters added, “He got a kick out of the little things in life.” “He accomplished a lot but never praised himself.”  A Facebook post by his son Peter detailed how he would often tell his children to “Stay close to God.”

According to Milwaukee’s Department of Public Works, an operator controls the bridge remotely from another tower nearby. The incident is under investigation, and no charges have been filed.

“We at the Department of Public Works send our deepest sympathy to the family and friends who lost their loved one from a tragic event at the Kilbourn Avenue Bridge on Monday. The details of this fatal incident are still under investigation in cooperation with Milwaukee Police Department. Our employee during the time of the incident was fully trained and in his fourth year as a bridge operator having conducted hundreds of bridge openings. He is currently on leave following this incident and was connected with the City’s Employee Assistance Program for counseling.”