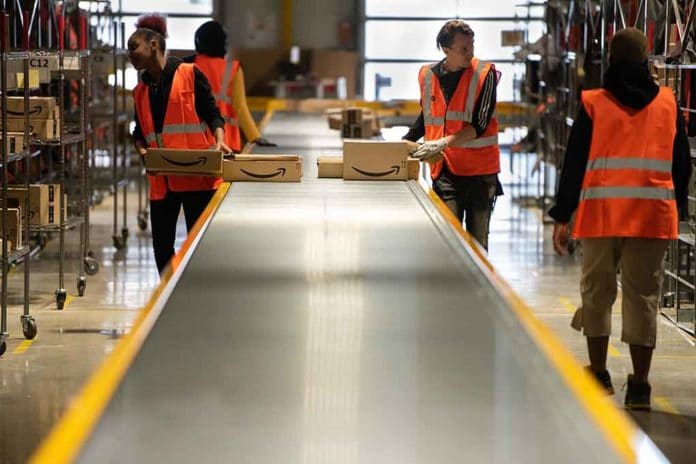 (TheDailyHorn.com) – Working in a warehouse isn’t a dream job for most people. The work is laborious, and frequently the hours are long. Yet, there’s a difference between working hard and working in a slave factory.

There are numerous stories of ex-Amazon warehouse workers who complained of unfair work practices. In August, an unnamed female Amazon employee from Connecticut quit her job after comparing the work environment to modern slavery.

'I quit my Amazon warehouse job after being forced to stand all day'
https://t.co/JOIBQB7vGl

The woman said the company put pressure on workers to work fast and didn’t allow employees an opportunity to sit down during shifts. Eventually, she said, she left her job because the company forced her to stand and lift heavy boxes all day long without a break. In one instance, the worker said she suffered an injury that left her leg bloodied and bruised after trying to pick up a heavy box.

That’s not all she experienced. The massive company often created contests for employees to see who could work the fastest in an hour. According to the former Amazon employee, the reward might be a free bottle of water.

In a separate allegation, another former Amazon warehouse worker claimed the company created a prison-like environment. To speed up operations, supervisors devised games and awarded employees points to redeem prizes.

Amazon employs approximately 950,000 workers in the US.