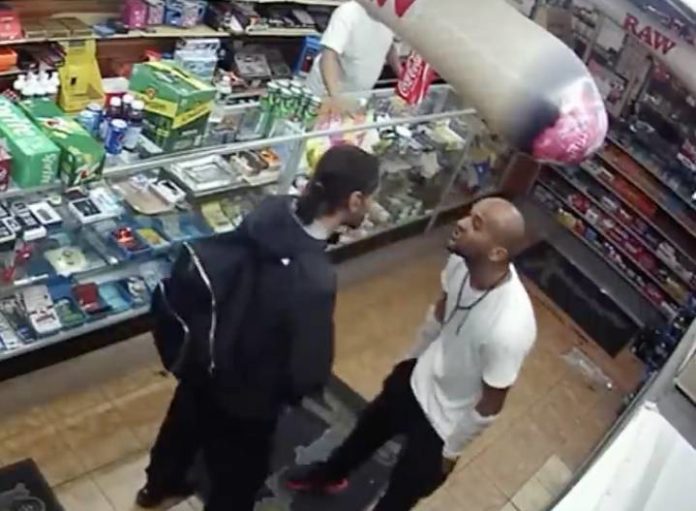 Witness: Man stabbed to death after argument over saying ‘thank you’ – WSBTV

A New York City man was stabbed to death in a smoke shop in Brooklyn, New York. A man was alleged to have held a door open for another customer without being thanked.

According to reports, the victim, who is wearing a white shirt on in the video, opened the door for the suspect and then asked, “Why don’t you say thank you?”

As reported by WABC, Kharef Alsaidi, an employee of the store shared, he just didn’t say “thank you” for opening the door.

Alsaidi continued, the victim opened the door for the suspect, then asked him, “Why don’t you say, ‘Thank you for opening the door?’”

The suspect allegedly responded with “I didn’t tell you to open the door for me.”  Soon after argument began and escalated quickly.

The brutal attack was caught on security cameras, and the two men engaged in a physical confrontation. Video shows the men being pushed into the walls and glass showcases of the store.

Assaidi tried his best to calm the situation down, he said he told the suspect, “Just put the knife away. The guy isn’t worth it. It’s not worth it. I tried my best to de-escalate the situation, but nothing worked.”

WABC-TV reports that the verbal dispute quickly escalated into a physical altercation outside the store, and the victim taunted the suspect, saying, “Stab me if you can.”

As reported by the New York Post, “The door-holder punched the other man as he hopped aboard his e-bike to leave, prompting his rival to attack him with a sharp object.”

After grabbing a knife from his bike, the suspect stabbed the victim in the abdomen and neck.

He came into the store stumbling over and bleeding heavily.

The victim was rushed to New York Presbyterian Brooklyn Methodist Hospital, where he was pronounced dead.

After the incident, the suspected killer then rode away on his e-bike.

The investigation is ongoing and no arrests have been made.

According to reports, the suspect wore a black sweater, white shirt, and jeans. Last seen with a black backpack on.

For more coverage on this story, see the additional news sources: