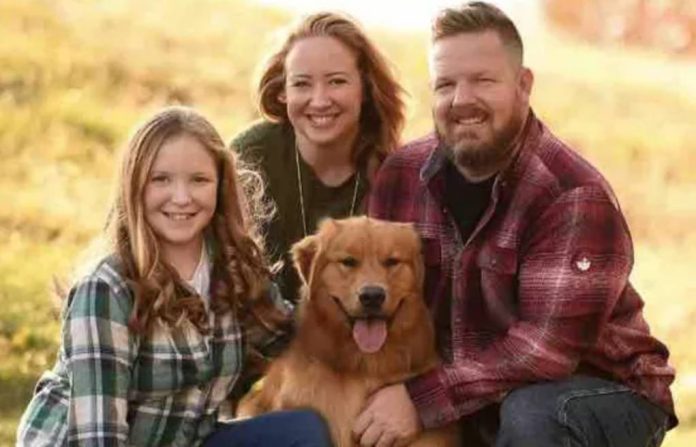 A father tragically died on Sunday, November 11th, when he succumbed to injuries he sustained from a freak accident while helping his daughter collect food items for her Girl Scout troop.

Aaron LaMore and his family were collecting food items for their daughter’s girl scout troop on Sunday, November 6th.

He was riding in the back of an open hatchback in the family car to pick up the food donations in a nearby subdivision. The vehicle was driving very slowly, at about five mph, when LaMore fell out and suffered a fractured skull.

In an interview, Ryan Talaga, LaMore’s brother-in-law, told Patch that the car didn’t get very far when the accident occurred.

He said, “They didn’t even get to the first house when he lost his footing, fell backwards out of the car onto the pavement, and struck his head on the back.”

Despite being injured, Aaron managed to pick himself up and walk into the ambulance when emergency personnel arrived.

According to a GoFundMe page, Aaron went into cardiac arrest for four minutes while waiting for transportation to Silver Cross Hospital. In an attempt to save his life, he was airlifted to the University of Chicago. According to reports he suffered a fractured skull and bleeding on the brain.

Aaron, also a veteran, died from his injuries on Veteran’s Day, November 11th.

According to Patch, the family was able to add LaMore as an organ donor before taking him off life support. A Hero’s Walk was held in his honor at the University of Chicago as he was able to make life-saving donations that day.

Talaga told Patch, “We tried to turn a terrible situation into a situation that gives us a little sense of peace… This is the worst thing that could happen to my sister and my niece, but knowing that he’s able to save lives, gives them some peace.”

According to reports, he was able to donate his kidneys, liver, tissue, and heart.

Talaga described LaMore as “selfless.” During the interview with Patch, he said, “Any time I needed something, he would help me, take the time to walk me through it. … He would always give as much as he could.”

In addition to his wife of 16 years, Erin, he is also survived by his 12-year-old daughter, Mia.