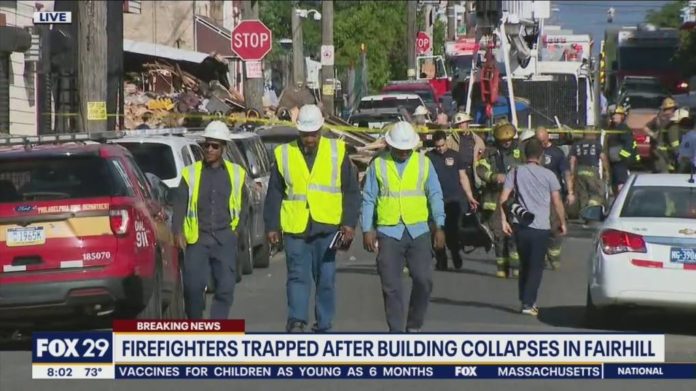 A firefighter died after a building collapsed in Philadelphia Saturday morning, and five other people had to be pulled from the rubble.

Philadelphia officials have identified the firefighter that was killed in the collapse. Lieutenant Sean Williamson, 51, was a 27-year veteran of the Philadelphia Fire Department.

Williamson and other fire crew members were called to the 300 block of W. Indiana Avenue in the city’s Fairhill section after a fire broke out at a three-story restaurant and residential building. The building collapsed at 3:24 a.m. and was eventually placed under control at 7:12 a.m.

Firefighters were called to a building fire at 1:53 a.m. The building collapsed at 3:24 a.m., trapping six firefighters. One person even jumped from the 2nd floor in order to avoid being caught in the collapse. The people trapped inside were able to communicate with rescuers via tapping.

NBC10’s Skyforce 10 helicopter showed dozens of firefighters searching through the rubble for their colleague.

Philadelphia Fire Commissioner Adam K. Thiel said the department was grieving with the family, friends, and community for all those affected by the fire.

Philadelphia Mayor Jim Kenney issued a statement on the death of Philadelphia Firefighter Lieutenant Sean Williamson, saying that Williamson “exemplified heroism by doing what our first responders do every day” and asking that people keep his family in their prayers.

For more information on this story, consider the following news outlets listed below to receive more updates.