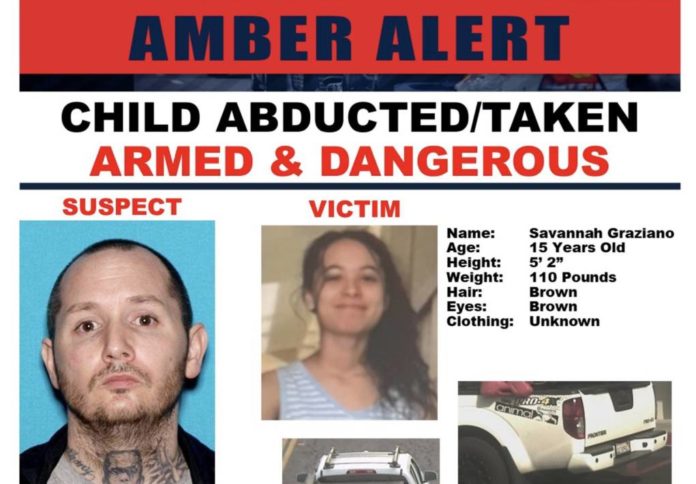 A tragic ending to an Amber Alert that had been issued for fifteen-year-old Savannah Graziano. Savannah was taken by her father, Anthony John Graziano, after allegedly killing Savanah’s mother. According to Fontana Police, Graziano allegedly killed Tracy Martinez on Monday morning in Fontana, CA.

Reports detailed that the couple was estranged and going through a divorce. After Graziano fled, investigators issued the Amber Alert for Savannah.

It all went down on Tuesday when someone called in to report seeing the Amber Alert suspect and teenager in a white truck near Barstow. Sheriff’s officers said the truck matched the description of the 2017 Nissan that the suspect last drove.

It was around 11:15 a.m. when the California Highway Patrol began chasing the vehicle.

During the chase, Graziano fired at deputies out of his rearview window when deputies responded to that call. Officials described it as “constantly shooting back at the deputies.”

Somehow the vehicle stalled and “became disabled” on the shoulder of the highway in Hesperia, CA.

According to officials, Graziano and deputies engaged in a “firefight.”  As the police opened fire on the truck, Graziano was struck by the bullets.

The San Bernardino County Sheriff’s Department said they believe the passenger was a 15-year-old girl. In the midst of the shootout, Savannah Graziano, wearing tactical gear, jumped out of the truck and ran toward the deputies. When the gunfire broke out, she was also struck.

According to reports, Anthony Graziano died at the scene, and Savannah was rushed to the hospital, where she later died.

Police will continue to investigate the fatal incident.