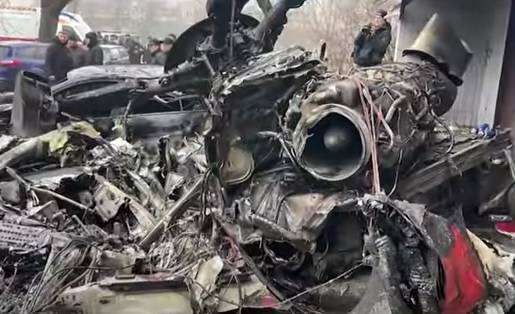 The Ukrainian Interior Minister, Denys Monastyrsky, and a child were among the 14 people killed in a helicopter crash in Brovary, an eastern suburb of Kiev, on Wednesday. The helicopter crashed into a kindergarten and its playground, causing indescribable pain according to Ukrainian President Volodymyr Zelenskyy. The nine occupants, including the crew of three, were all reported dead and 25 people were injured, 11 of which were children. The cause of the crash is still unknown as there was heavy fog in the area at the time of the incident. The crash sent pieces of the aircraft flying across the playground, with blankets being used to cover the bodies on the ground.

Local residents of the area gathered flowers and small knitted stuffed animals to create a memorial for those who lost their lives. One grandmother, Nina Letun, had her 5-year-old grandson Vova, a student at the school, with her. Vova was not at school as he was sick the day before, otherwise he would have been there. She wept for the children who died in the crash, pointing to a 12-story building behind the school and saying “I saw a fire, the fire was bigger than that 12-story building.”

The Ukrainian government has appointed Ihor Klymenko, chief of the Ukrainian National Police, as the acting minister of internal affairs following the incident. The interior ministry is responsible for law enforcement, the police force, the national guard, and the emergency services of the state. They are currently investigating three possible explanations for the crash: that the aircraft malfunctioned; that it flew despite poor visibility; and that it was deliberately targeted.