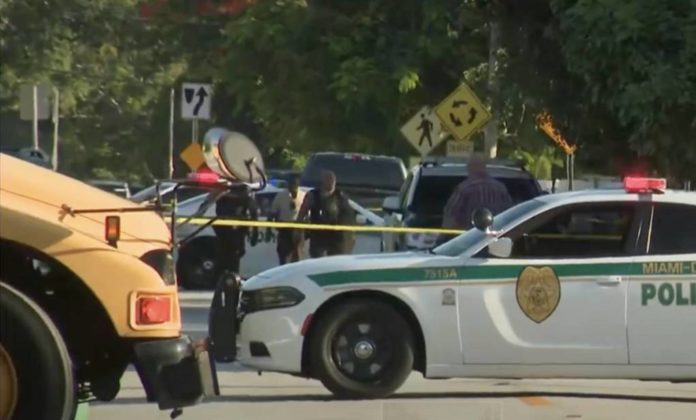 Two 12-year-old boys waiting for their school bus were shot and wounded in Northwest Miami-Dade. According to Miami-Dade Det. Argemis Colome, the shooting began as a robbery attempt near Northwest 109th Street and Tenth Avenue on September 8.

During a press conference, police said the 16-year-old boy fired the gun after demanding the cell phones of the two boys. After shooting the boys, the suspect fled. “These are two juveniles, two 12-year-olds; it could be one of our children going to school,” Colome stated.

Police quickly set up a perimeter after the shooting and began searching for the teen. The teen was eventually found in a nearby shed and taken into custody.

Miami-Dade police found multiple weapons, including two handguns and one rifle. Colome said the Miami-Dade Police Department is asking, “Why is a 16-year-old armed with a firearm?”

The two 12-year-old students attend Madison Middle School. “That is the last thing that parents want, their children getting shot at upon arrival at school.” According to Colome.

Josue Camuse, one of the boys shot, now recoving at home, speaks out about the incident. In an interview, he tells CBS News Miami, “Me and my friend were waiting for a bus, and then this guy comes up to us and asks me for my phone. I had a regular phone, but my friend, he had an iPhone. So, he went for my friend. The gun wasn’t loaded, so he loaded it and said give me your phone, and if you don’t, I will do you for real. And then my friend kind of backed up, so he went in front, and he took out his gun and backed up, and then he shot us.”

“I’d like to say it is not a good idea to go shooting kids for their phones or other stupid stuff. I think it’s stupid for robbing some kid for his phone.” Camuse adds.

Camuse detailed his injuries, including a bullet that is still lodged in his body.  He says he can feel the bullet in his leg. He shared in the CBS 4 interview, “I got hit right here and it came out right here and my arm was like this where the bullet came through here. The 2nd bullet missed me. The shot broke this bone here in my hand. It only hurts at night. My pinkie hurts. I am upset about what happened because I can’t use my left arm. I can only use the other one.”

According to CBS 4, Angel Campos, the other victim was able to leave Jackson Memorial Hospital late Friday afternoon and has now returned home.

Miami-Dade police found multiple weapons, including two handguns and one rifle. Colome said the Miami-Dade Police Department is asking, “Why is a 16-year-old armed with a firearm?”

The Miami-Dade Police Chief Alfredo stated, “I am appalled that a 16-year-old had a rifle and two handguns in his possession. “I’m deeply disturbed that he used one of these firearms to shoot two of our innocent children.”