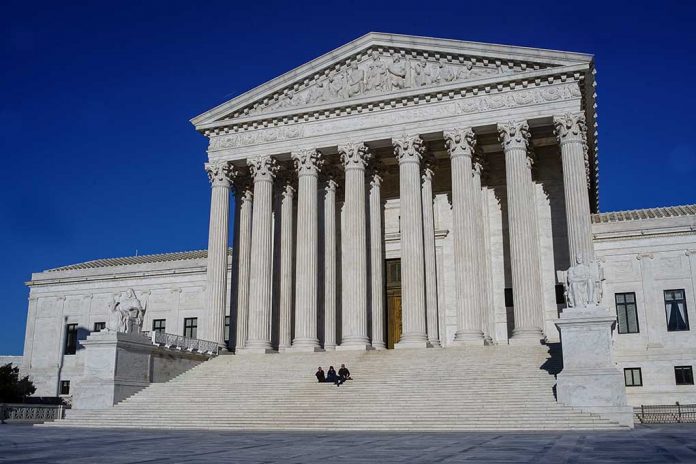 (TheDailyHorn.com) – Conservative Justices have a 6 to 3 advantage in the United States Supreme Court thanks to the circumstances that allowed former President Donald Trump to appoint 3 justices to the bench. Democrats have been crying foul because then-Senate Majority Leader Mitch McConnell (R-KY) blocked debate on Merrick Garland’s nomination to the bench in 2016 to replace liberal Justice Ruth Bader Ginsburg, who unexpectedly died earlier that year.

As a result, some Democrats have been pushing for liberal Justice Stephen Breyer, 82, to retire before the upcoming midterm elections hoping to avoid a similar situation should Republicans take back control of the Senate, which is a very real possibility.

One person looking at a possible nomination from President Biden is Leondra R. Kruger, a 44-year-old LA-born jurist and lawyer. Ketanji Brown Jackson, the frontrunner according to analysts, was recently confirmed by the Senate to serve in the US Court of Appeals for DC; this appointment is often a pathway to becoming a Supreme Court Justice.

Another candidate, 45-year-old Melissa Murray, is currently a professor of law at New York University. After graduating from Yale, Murray served as a clerk for Supreme Court Justice Sonia Sotomayor.

Another law professor, Sherrilyn Ifill, currently serves as the National Association for the Advancement of Colored People (NAACP) Legal Defense Fund president. Last, but not least, Leslie Abrams Gardner, 46 years old, currently serves as a judge for the US District Court of the Middle District of Georgia.

All five of these candidates are considered more liberal than Breyer. However, it should be noted that Breyer has not mentioned anything about stepping down, has hired clerks for the next session of the Supreme Court and believes the Court would be further politicized and polarized by his retirement.