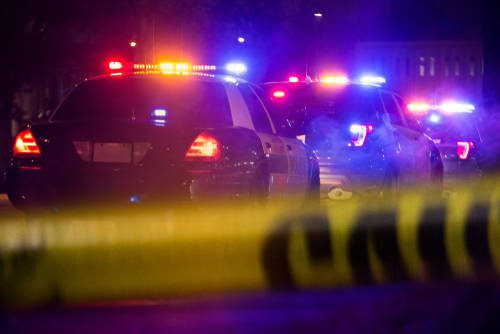 According to police, a man abducted his estranged wife and buried her alive in the thick forests of Lacey, WA on Sunday. The woman was eventually able to free herself and crawl her way out of the shallow grave.

After the woman escaped, she ran frantically through the forest until she found a house.  After she approached the door to the home, the owner called the police and detailed the woman on his property.  The caller talked about how she was screaming and crying that her husband was trying to kill her.

On arrival, the deputy was told that the woman was hiding behind a shed.
The deputy approached the woman, and as soon as she realized that he was law enforcement, she ran toward him, screaming for help.

She said, “My husband is trying to kill me,” she said. “Help me.”
The deputy observed the duct tape on the woman, which was on her neck, lower face, and ankles.

In addition to being distressed, the deputy noted that the victim was in a state of trauma and had difficulty recalling what had happened.

According to her, Chae An kidnapped her and tied her wrists, hands, and ankles with duct tape before driving her out into the woods.

It was reported that the woman argued with her husband over an impending divorce and money Sunday afternoon, before the kidnapping.

According to the victim, her husband punched her in the head several times, causing her to fall to the floor.

The woman reported Chae An had taped her hands behind her back and covered her eyes, thighs, and ankles with duct tape.

According to reports, she was able to use her Apple watch to reach 911 but she couldn’t communicate back.  When Chae An saw her Apple watch he destroyed it with a hammer.

As the victim described, her husband dragged her body down the hall, the stairs, and the front of the garage door. As far as she recalls, she was thrown in a van and driven around.

She said she was taken from the van and put on the ground, where Chae An could be heard digging in the dirt.

The woman said she was then stabbed in the chest with a sharp object and then put into the hole that Cae An dug. He put a heavy tree on top of her and began covering her with dirt.

While she could wiggle to keep dirt from getting in her face, she found breathing challenging.

She stayed in the grave for a few hours and eventually freed herself by wiggling her body to get the tape off.

After escaping, it was dark, and she noticed the van was still there. She recalled that the windows were steaming with a light on.

Eventually, law enforcement located the area where she was buried. In the loose dirt around the hole, they discovered duct tape.

Chae’s vehicle was found about 200 yards off Stedman Road by a citizen walking along a trail at 7:38 a.m. Lacey police and Thurston County deputies quickly responded to the scene.