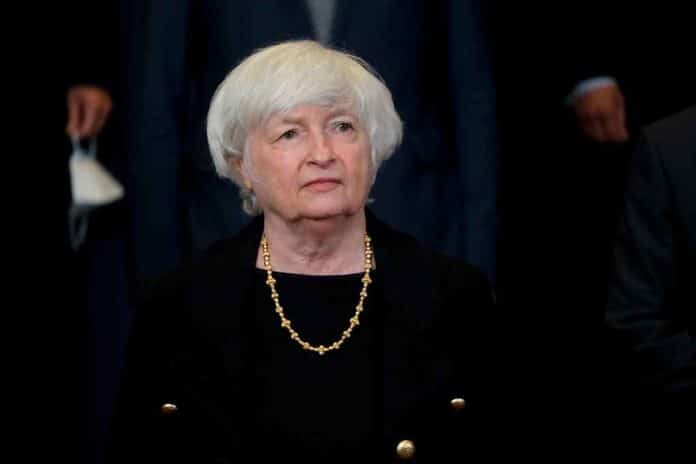 (TheDailyHorn.com) – As the end of November nears, Democrats in Congress are running out of time on multiple fronts. While Democratic leaders continue to pursue their radical semi-socialist partisan budget reconciliation agenda, other important items that could threaten the health and stability of the US economy (which is already struggling with inflation and a supply chain crisis) are sitting idly by. In December, Congress must make a decision with regard to the debt ceiling before the government defaults on its debts.

In mid-October, Congress passed a stop-gap measure and pushed the debt ceiling issue back until December 3. Treasury Secretary Janet Yellen said at the time that the December date was the farthest day before the threat of another debt ceiling crisis would hit home. Then, on Tuesday, November 16, Yellen moved the date from December 3 to December 15, at which time Congress allegedly needs to act to avoid a perilous crisis.

In October, Republicans refused to work with Democrats to pass the debt ceiling. The GOP argued that if the Democratic Party, which is in control of the executive and legislative branches, wants to shove a multi-trillion dollar semi-socialist bill down America’s throat on a partisan basis, it could pass the debt ceiling on its own in the process. Unfortunately, Democrats refused to play ball and put America’s credit standing in jeopardy when they had the power to extend it on their own. So, in mid-October, with one-time help from Senate Minority Leader Mitch McConnell (R-KY), the stopgap measure passed and delayed the inevitable in hopes that Democrats would have their house in order by December. Unfortunately, with only a few weeks to go, the Democrats’ affairs are still in disarray.

Unfortunately for Democrats, time continues to march on. On Tuesday, Treasury Secretary Yellen informed lawmakers they would have a little more breathing room, but not much. She told Congress that the US would reach the debt limit on December 15 instead of December 3.

The additional 12 days may not help. Congress has a bad habit of waiting until the last second to do much of anything. As a result, it’s always a crisis of urgency, thanks to poor planning and failure to prioritize sensibly.

So, why the change?

Yellen said the revision is primarily due to President Biden’s $1-trillion bipartisan infrastructure deal signed into law on Monday, November 15. The law appropriated $118 billion for the Highway Trust Fund, and those monies helped alleviate the crisis for 12 days. Though the money helps, it’s not enough. Yellen said that beyond December 15, the government would not have enough money to sustain its operations.

As she usually does, the Treasury Secretary warned a default could lead to a recession and harm the dollar’s role as the world’s leading currency. To avoid this outcome, Congress must pass legislation, and Yellen’s hoping it will be a long-term solution to create stability in the marketplace.

Will Democrats pass a bill before December 15? It’s anyone’s guess.