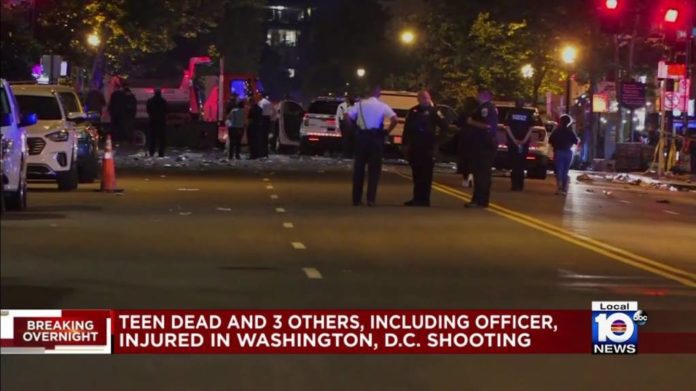 Social media promoted a free music event, but police arrived to assist the crowd. An “incident or fight” broke out, and weapons were found in the event area.

Four people were shot during the altercation, including a police officer and a juvenile. Three adults and a 15-year-old boy were injured.

Police recovered several firearms from the area and said they want to hold people accountable for holding unpermitted events in the city.

Several musical artists were performing during this Juneteenth celebration on U Street. D.C. Mayor Muriel Bowser called for accountability.

The shooting began after two separate incidents following an “unpermitted event” held by the group Moechella at about 6 p.m. Several hundred people gathered, and after an “incident or fight” among the crowd, people started to flee.

Police shut down an event and treated victims who suffered injuries while running away, when gunfire erupted. Those who were injured are currently recovering at a hospital.

The mayor said the police department would look into whether “legal action” should be taken against the organizers.

Moechella organizers shared a statement saying they don’t condone violence of any sort and would be stripped of their platform if they continued to tolerate it.

D.C. Councilmember Brianne Nadeau and Mayor Muriel Bowser expressed their condolences to the family of the young victim and the three others injured in the shooting.