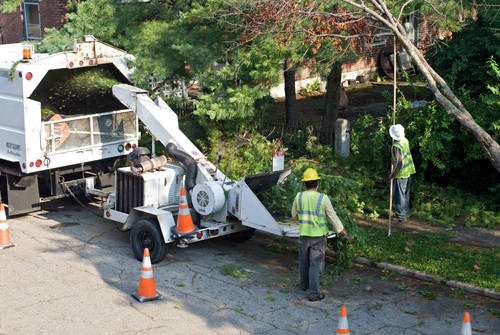 It was reported that a tree trimmer lost his life after accidentally falling into a wood chipper while cutting back a tree.  The accident happened in Menlo Park, just outside of San Francisco.

According to police, the worker died at work at 12:53 in the afternoon. Upon arriving at the scene, officers discovered the deceased worker in the 900 block of Peggy Lane.

According to the neighborhood residents, trees get trimmed all the time throughout the city. There are many trees, and on Peggy Lane, there are towering trees lining the streets.

Tuesday was sadly marked by tragedy though. Bartlett Tree Expert Company employed the man that died in the tragic accident, according to the Division of Occupational Safety and Health.

Cal/OSHA findings reported the following, “Based on an outside source; the employee was pulled into the chipper during tree trimming operations.”

Lisa Mitchell, a long-time resident, said, “We all feel sick and sad, we’re really sad. We’re trying to imagine what the poor family and their fellow workers are feeling. And it’s just, it’s a lot. We just feel terrible.”

Tuesday afternoon, workers at the site said the company would not issue a statement regarding the incident.

Mitchell says that the company is widely known in the area. She explained, “We see a lot of their trucks. So, I can only imagine how they feel, because I’m sure they treat their employees like family, and this is just awful.”

As Than Skinner points out, the neighborhood was previously alerted about upcoming tree-trimming operations. However, they never imagined it would end in tragedy.

According to Skinner, the neighborhood is usually peaceful and quiet. He added, “when I got home around 2:30 p.m., the street was completely closed off. We wondered if something happened to one of our neighbors.”

Nevertheless, residents along Peggy Lane say they’re aware of how dangerous this work can be. The tragic events of Tuesday are just one example.

Mitchell remarked, “You hear about horrific things happening, but you don’t really realize that they can happen; today was clear evidence that they can.”

The worker’s death is under investigation by the Division of Occupational Safety and Health, and his identity will be released by the San Mateo County Coroner’s Office.