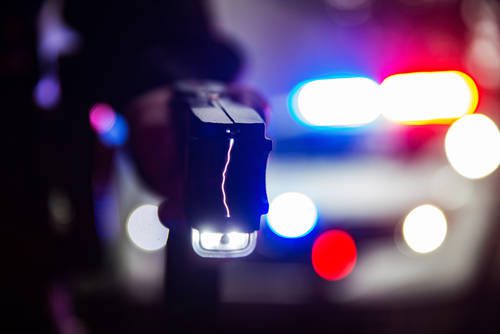 State police used a taser on an Arkansas man wearing a backpack containing a gallon of gasoline when he was tased, causing him to be engulfed by a fireball. However, the man is expected to recover from his injuries.

The incident occurred around 1:18 a.m. on October 13, when a state trooper in Little Rock attempted to pull over a motorcycle with no license plate.

The rider wouldn’t stop for the police. The man, identified by state police as thirty-eight-year-old Christopher Gaylor, fled on his motorcycle at speeds approaching 100 miles per hour.

According to the police, “He ignored multiple traffic stop signs and traffic lights as he worked his way toward Interstate 30, where a second state trooper encountered the motorcyclist.”

According to reports, he jumped off his motorcycle and ran through a residential area after getting off the freeway. A trooper then deployed a taser as he tried to stop Gaylor, and a fireball engulfed the suspect. The dash cam video shows that troopers doused the flames with a fire extinguisher after shouting, “he’s on fire.”

NBC reported that a medical ambulance was dispatched after troopers doused the flames with a fire extinguisher.

“An investigation has since revealed Gaylor was carrying approximately 1 gallon of gasoline in a backpack,” according to the police.

Police say that Gaylor is recovering well in the hospital.

Gaylor is accused of felony fleeing, failure to register a vehicle, no liability insurance, driving with a suspended license, and reckless driving according to police.

State spokesperson Bill Sadler told CNN that no Arkansas State Police personnel are under investigation or put on administrative leave because of the incident.

According to Arkansas state police, Gaylor never indicated that he had an accelerant in his backpack.

Sadler said, “Before the electronic control device ( the taser) was deployed, Mr. Gaylor could have chosen at any moment during the vehicular pursuit, or in the seconds after he abandoned the motorcycle to comply with the traffic stop or orders to stop while on foot.”