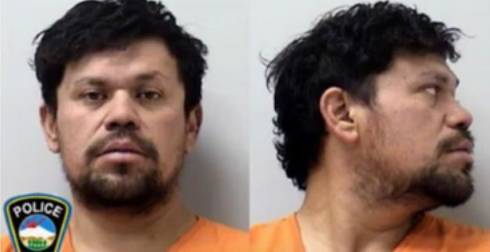 In Colorado Springs, a 36-year-old man was arrested last week for allegedly shooting and killing his roommate with a compound bow and arrow, then breaking into the police station in an effort to turn himself in. Earlier this week, Carlos Alberto Trejo was arrested and charged with murder in the death of 37-year-old Martin Rodarte, according to court records reviewed by Law&Crime.

The Colorado Springs Police Department detained Trejo at approximately 1:23 a.m. on Dec. 18 after allegedly catching him breaking a window and trying to enter the secure back parking lot of the station.

Trejo is alleged to have scaled the back gate marked “Authorized Personnel Only,” before attempting to enter the locked back door of the substation. As Trejo was unable to gain entry, he pulled the fire alarm before smashing the window near the back door of the station with an ice scraper.

As the corporal confronted Trejo in the act and asked him what he was doing, Trejo allegedly confessed to killing Rodarte and stated that he was “trying to turn himself in.”

“I just woke up and shot my friend in the chest,” he is alleged to have stated, providing an address in the 1300 block of Kelly Johnson Boulevard. “I shot him with an arrow,” he allegedly added, identifying the victim as “Martin.”

Due to an encounter the officer had with Trejo less than two days before, the officer initially did not believe Trejo had actually shot anyone.

According to the affidavit, Trejo called CSPD on Dec. 16 at approximately 7 p.m. He stated “that there was a situation in the apartment which required him to leave,” but refused to provide any further information to the operator. Upon calling him back, the officers reported that he was “very uncooperative.”

Several hours later, at approximately 11 p.m., police responded to Guthrie’s Bar and Grill, located only blocks from Trejo’s home, to check on a customer who was “on acid, hallucinating, and making other customers uncomfortable.” As soon as Trejo arrived at the scene, he said he was on acid and was taken to the hospital for medical evaluation “for a possible acid overdose.”

After Trejo was arrested for allegedly breaking into the police station, officers responded to the Kelly Johnson Boulevard address, where they found the front door unlocked. Upon entering the apartment, they discovered the body of a male adult on the bedroom floor along with a compound archery bow.

Trejo’s girlfriend told investigators she had moved out of the Kelly Johnson Boulevard home a few weeks ago following “a disturbance” between the two. Around the same time, Rodarte, who she identified as Trejo’s cousin, moved in, she allegedly stated.

Trejo is currently being held in the El Paso County Jail on a $500,000 bond, according to jail records. He is scheduled to appear in court on January 25 for his preliminary hearing.