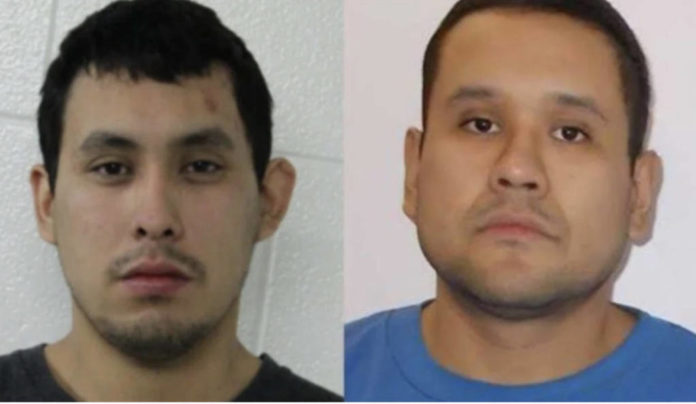 Two men are wanted in Canada after stabbing multiple people, leaving ten people dead and eighteen wounded.  The attacks happened on Sunday in several different locations in the James Smith Cree Nation in Saskatchewan.
According to the Prince Albert Police, “The Saskatchewan RCMP (Royal Canadian Mounted Police) have issued a province-wide alert for two suspects following multiple stabbings on James Smith Cree Nation. The suspects may be in a black Nissan Rogue with SK license plate 119 MPI.”
The two suspects have been identified as Damien Sanderson and Myles Sanderson.  Damien Sanderson is five feet seven inches tall and weighs 155 pounds.  He has black hair and brown eyes.  Myles Sanderson is six feet and one inch tall and weighs 240 pounds.  He has brown hair and brown eyes.
According to reports, Myles Sanderson has been wanted since May.  He went on parole after serving five years in jail for robbery and assault and went missing shortly after.
Prime Minister Justin Trudeau tweeted, “As this is an unfolding situation, I encourage everyone in the area to listen to the advice of law enforcement to take shelter and follow the proper precautions,” Trudeau later made a statement Sunday evening, he assured that The Government of Canada would assist the James Smith Cree Nation.  He called on justice for those responsible for the “abhorrent attacks.”
Regina Chief Evan Bray states that “We will not stop this investigation until we have those two safely in custody.”
UPDATE: The RCMP announced that Damien Sanderson, thirty-one, has been found dead.  He was found in the province of Saskatchewan in a “heavily grassed area”.  Police do not believe his injuries were self-inflicted.