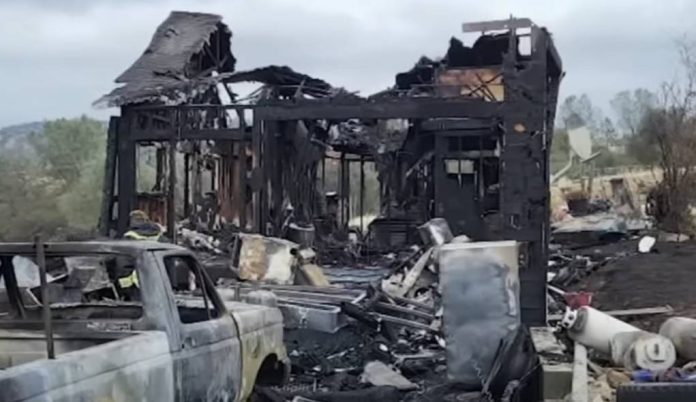 One man in Northern California believes a meteor fell to earth and landed on his property, causing a massive fire that destroyed his home.

On Friday night, several others spotted a bright flaming ball in the region, and officials are now investigating whether a meteorite could have caused the fire.

Dustin Procita who resides in the home tells a local news station KCRA, “I heard a big bang. I started to smell smoke, and I went onto my porch, and it was completely engulfed in flames.” He added that it looked “like a flaming basketball.”

A bright ball of light that lit up the sky landed in the middle of nowhere at around 7:30 p.m., as reported by KCRA.

He didn’t see it himself, but several witnesses observed a giant flaming ball. Procita said, “I’ve always watched meteor showers and stuff as a kid, but I definitely didn’t look forward to them landing in my yard or through my roof. I did not see what it was, but from everybody I talked to, it was a flaming ball falling from the sky, land in that general area.”

It took the Penn Valley Fire Department and Cal Fire hours to contain the flames in this rural area. They are investigating what caused the fire.

Thomas said, this was a “very unique type of situation.” He adds, “I’ve been an investigator for 12 years and in the fire service for 25. I’ve never been to a fire that was caused by a meteor, But at this point, because our investigation isn’t done, I can’t rule that out as a possibility. They have struck homes throughout the world in the past.”

As reported by ABC 7, Captain Josh Miller believes it could be a meteorite, “Meteorite, asteroid — one of those two,” he adds, “I had one individual tell me about it first and like, okay, I’ll put that in the back of my mind. But then more people — two, three, or four more started coming in and talking about it.”

Amazingly, someone captured the ball of flame on video; Procita watched the video and described it as “a flaming basketball coming out of this sky,” he added, “Definitely feel very lucky that it was 30 feet away from me and not five.”

NASA reports that the southern Taurid meteor shower is occurring at this time, with the peak expected this weekend.

The Taurus’s are a breakup of a very large comet 20,000 years ago.  They are a cluster so large it takes several weeks to pass through it.

It is now being investigated whether a meteor crashing to earth caused the fire, as NASA and the US Air Force will be contacted.