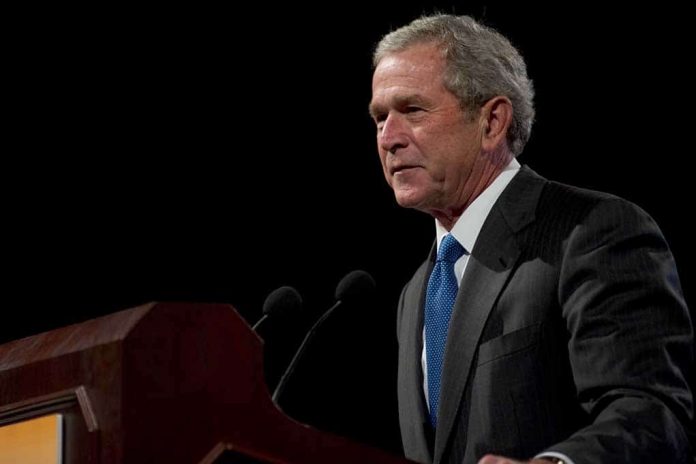 (TheDailyHorn.com) – There are over 20 million veterans in the United States. The oldest and least numerous served in World War II, and the most recent vets left the armed forces just yesterday. As one can imagine, this large and diverse group is not monolithic. But all served, and some sacrificed much on the battlefield, leaving scars that many Americans could never imagine.

On Monday, September 20, former President George W. Bush spoke at a Distinguished Speaker Series event in Beverly Hills, California. Marine Iraq War veteran Corporal Mike Prysner was in attendance. The veteran appeared deeply upset about the toll that he and thousands of Iraq war veterans endured because Bush called for an attack on Saddam Hussein.

WATCH: "When are you going to apologize for the million Iraqis dead because you lied?"

Prysner is a long-time Bush critic. A year before the former president sent the corporal’s unit to Iraq, the then-active duty Marine sat behind Bush when he spoke to his fellow troops.

This time, he didn’t intend to stay quiet. While Bush was speaking, Prysner launched a tirade against the former president. He shouted that Bush lied about why he entered Iraq and demanded that he apologize for the millions of Iraqis who died because of the former president’s alleged lie.

That wasn’t all the former Marine corporal said, though. He also claimed that Bush killed his friends and lied about weapons of mass destruction, as well as Saddam Hussein’s connections to the terrorist events surrounding 9/11.

As security rushed the veteran out of the room, Prysner once again demanded that Bush apologize for his actions. Instead, the former president simply responded that Prysner should behave himself.