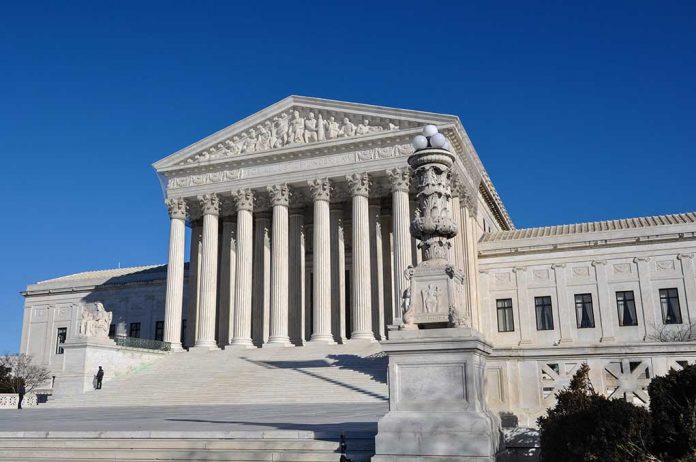 (TheDailyHorn.com) – The US Supreme Court consists of nine Justices, six of whom were appointed by Republican presidents and three by Democrats. Democrats threatened to expand the court in the days and weeks surrounding Amy Coney Barrett’s confirmation hearings. Now that they are in the majority in Congress, discussions about court-packing are now on the table.

It’s extremely rare that Senate Minority Leader Mitch McConnell (R-KY) criticizes the media over fake news. However, during his weekly press conference on Tuesday, April 20, he let loose on the national media over its Supreme Court-packing coverage.

McConnell’s frustrations weren’t necessarily over what the media says in its reporting. Instead, scolded them for what they don’t say.

On Thursday, April 15, several far-left Democrats, including Sen. Ed Markey (D-MA) and Rep. Alexandria Ocasio-Cortez (D-NY), announced they were introducing legislation to increase the number of Supreme Court seats from 9 to 13. It’s just enough for Democrats to pack the court with their own judges and outnumber the conservative votes on the court.

Media sources are leaving out some of the essential details of the Democrat’s plans when covering the issue. Those omissions have McConnell’s ears turning red.

In late 2019, now deceased Justice Ruth Bader Ginsburg said President Franklin D. Roosevelt’s effort to pack the Court was a bad idea. Just last month, Justice Stephen Breyer noted politicians should think long and hard before changing laws to pack the court and turn it into a political body. Both Justices staunchly opposed what the Democrats are trying to do now. Yet, the media doesn’t report that tidbit.

McConnell asked why the press isn’t including the two “objective analyses” by two of the most liberal Justices in the last decade. He noted he rarely rebukes the media for “fake news.” However, his frustration made it impossible for him to sit idly by as Democrats and President Biden continue to get a free pass from the media.

Formation of the Presidential Commission on SCOTUS

The president recently created a new commission to study potential Court reforms and their impacts. McConnell said the commission is nothing more than a veiled attempt at clothing the attack on the court “in fake legitimacy.”

The procedure for appointing and confirming judges is straightforward. As McConnell noted in June 2020, if applying the law and the Constitution upsets the Democrats’ plans, the problem isn’t with the courts; it’s with their agenda.