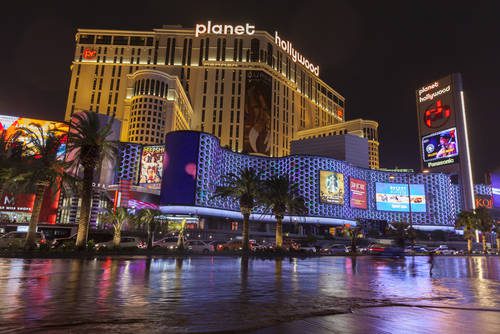 The heavy rain and lightning interrupted the hustle and bustle of Sin City. Monsoon rains and flash flooding set off a water-and-light display Thursday evening in Las Vegas that left slot machines drowned out and carpets saturated in several downtown casinos. Water filled many businesses, parking lots, and streets on the Las Vegas Strip and beyond.

The Weather Service warned of winds gusting up to 70 miles per hour, and the Las Vegas Fire and Rescue responded to 330 calls for service, primarily related to weather. Over 7,000 customers were experiencing blackouts after 10 p.m.

Many businesses were back to normal on Friday morning as the skies were perfectly clear and cloudless.

Stormwater tends to pool in Las Vegas, and comparatively small amounts of rainfall can cause damaging flooding. On Thursday, at the Harry Reid International Airport, the city received 0.32 inches (0.81 centimeters) of rain as other areas had reported more than an inch. The National Weather Service had issued severe thunderstorms and flash flood warnings.

Las Vegas isn’t the only area experiencing flooding in the United States.  Both Kentucky and Missouri have experienced deadly flood waters this week. There is at least one dead after the historic rainfall in St. Louis.  In Kentucky, the catastrophic flooding has killed at least 16 people since Wednesday and is still expected to climb.  According to the National Weather Service, flooding kills more people than just about any weather-related hazard.