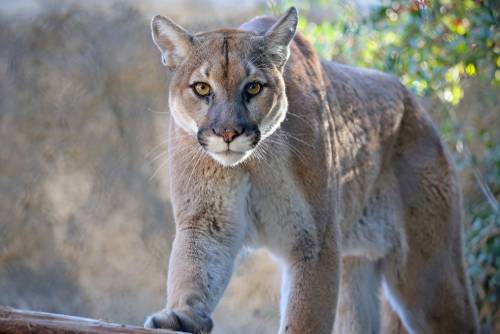 In Los Angeles, a mountain lion attacked and killed a dog while it was out for a walk Friday night. It is believed that the lion, known as P-22, was responsible for the attack.

The shocking event occurred around 6:30 p.m. on Friday in the Hollywood Hills and was caught on camera by a homeowner’s security camera.

It shows a mountain lion emerging out of the brush as a dog walker leads two small dogs, crouching as it follows them.

As reported by Fox News, a neighbor Warren Jason witnessed the attack. He told Fox 11, “He literally grabbed one of the dogs, pulled him so hard that he pulled him off the leash, and ran off with the dog in its mouth.”

The dog walker, who wanted to remain anonymous, told KTLA about the incident, “I felt the tug, and I heard Piper squeal,” the man said of the leashed dog. “I turned around, and I just saw a face. I didn’t know what it was.”

Many believe it could have been a P-22, a known mountain lion that lives in the Hollywood Hills/Griffith Park area. P-22 has been seen on multiple cameras in the neighborhood.

The man continued telling KTLA, “It was like a two- or three-second struggle,” said the man. “He had Piper in his mouth. He didn’t growl at all. I didn’t even hear him. I never had a chance.”
According to reports, the walker and the other dog did not sustain any injuries.

The dog attacked was named Piper, a Chihuahua mix whose owner, Daniel Jimenez, and his wife rescued in 2014. He told KTLA that he was celebrating his daughter’s birthday when the attack happened. He said, “We rescued her; she was just the sweetest dog. We’re just devastated at the loss of our little dog.”

Many in the community are worried for P-22 and his well-being after the attack.

One resident told Fox News, “The drought means there are less rabbits and other wildlife in the area, so P-22 is looking for food,” adding, “This is his home, and we have to adapt.”

According to CNN, the National Park Service believes P-22 killed Piper, but they must confirm his identity through a tracking collar.

As reported by Fox News, many residents are confident P-22 was responsible for Friday’s attack because they saw him on their surveillance videos and recognized his collar.