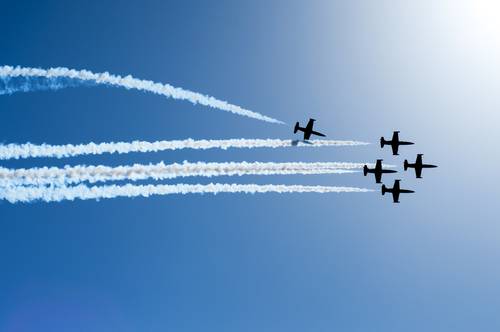 A mid-air collision occurred on Saturday afternoon at the Dallas Executive Airport during the Wings Over Dallas Airshow.

Several emergency crews responded to the incident at the Dallas Executive Airport during the Commemorative Air Force Wings Over Dallas show. According to the FAA. During the event a Boeing B-17 Flying Fortress and a Bell P-63 Kingcobra collided and crashed Saturday at approximately 1:20 p.m.

There was no information on how many people were on board either plane. According to Dallas Fire-Rescue, there are no reports of injuries on the ground or the status of the pilots.

In response to the incident, the FAA and the National Transportation Safety Board announced that they would investigate it.

Mayor Eric Johnson tweeted, “As many of you have now seen, we have had a terrible tragedy in our city today during an airshow. Many details remain unknown or unconfirmed at this time. The @NTSB has taken command of the crash scene with @DallasPD and @DallasFireRes continuing to provide support.” He added, “The videos are heartbreaking. Please, say a prayer for the souls who took to the sky to entertain and educate our families today.”

The airshow was marketed with World War Two planes on display and in action to let people “re-live history.”

This is not the first plane crash this month. Another airshow plane crash happened last week during an air performance in Buenos Aires, Argentina.

While performing stunts, one plane cut too close to the line. There is a video showing a shocking moment when an airplane crashed into a metal radio antenna on Nov. 5, 2022.

The event was full of airplanes and stunts.

It was not expected that there would be a collision or that observers would be injured.

Several planes are shown performing stunts at the festival before the camera pans back to an aircraft approaching from behind – eventually hitting the antenna.

The video shows a metal antenna breaking and falling, damaging the wing.
In the aftermath of the unexpected impact, the DHC-1 Chipmunk plane made an emergency landing.

Despite the hit, the pilot did not suffer any injuries.

In contrast, some spectators were injured.

A frightening encounter caused falling debris to injure four spectators on the ground. Two were treated onsite and the other two were taken to a local hospital.

Many videos were posted online detailing the collision.

BREAKING: 2 planes, including a B-17 Flying Fortress, collide at Dallas airshow pic.twitter.com/hdieiJuqvX

Below is the video detailing the plane in Argentina crashing into the antenna.