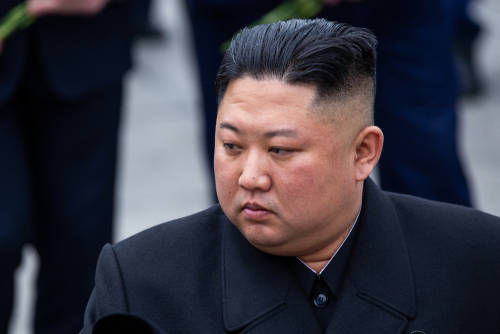 Kim threatens to use nukes amid tensions with US, S. Korea – The Associated Press

North Korean leader Kim Jong Un spoke to a group of Korean War veterans in a speech to mark the 69th anniversary of the end of the Korean War (1950-1953). Kim Jong Un warned that his country is prepared to use “absolute force” against the United States and South Korea if necessary. He also accused the United States of having “double standards” and for having “gangster-like activities” regarding joint military exercises with South Korea.

He also noted that his country’s military is ready to deal with any crisis and that its nuclear war-deterrent is also ready to deploy its full force. Kim Jong Un accused the U.S. of “demonizing” North Korea to justify its hostile policies.

Kim Jong Un was also critical of South Korea’s newly elected president, Yoon Suk Yeol, for his decision to take a tougher stance toward North Korea and to form a stronger military alliance with the United States.

South Korea expressed “deep regret” for Kim’s threats and said it would deal with any provocations from North Korea “with force, effectiveness.” The South Korean defense ministry repeated an early stance, saying it was ramping up military capabilities and joint defensive postures with the U.S.

North Korea is seeking more public support, with its economy reeling from the shutdowns caused by the pandemic, the United States-led sanctions, and his own poor governance. North Korea has also acknowledged its first outbreak of COVID-19.

Earlier this month, South Korea said it had detected what appeared to be shots fired by North Korea and had increased its monitoring and alert levels.

North Korea has tested several rockets this year, including its largest ICBMs and smaller MLRs. These rockets are prohibited by the UN Security Council resolutions.

South Korea is pushing ahead with a $2.6 billion artillery-intercept system to defend against North Korea’s arsenal of long-range guns and missiles.

For more coverage on this story, check out the following additional news sources: