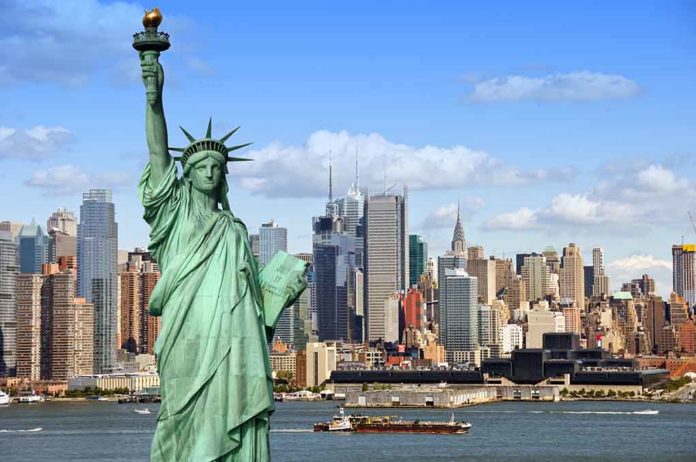 (TheDailyHorn.com) – Heading into the 2022 midterm elections, a recent NBC poll predicted that Democrats are facing major headwinds and a potential “shellacking” by Republicans. For months, polls have been sounding the alarm that Democrats are in trouble.

The far-left base is upset that Democrats failed to accomplish more radical changes despite holding majorities in the House and Senate and controlling the White House. Republicans are firmly against the far-left agenda, and independents are bailing on Democrats in extraordinary numbers.

Implementation of leftist policies so far has only led to immigration problems and spiraling inflation. So, New York Democrats are doing their best to help the national party out, not with new ideas, but electoral trickery. They’re heavily gerrymandering New York congressional districts.

Heading into the 2022 midterm election season, House Democrats have only a five-seat majority. In the Senate, it’s locked at 50 Democrats and 50 Republicans. To protect their party’s fragile lead, New York Democrats decided they’ll do what House Speaker Nancy Pelosi (D-CA) and President Joe Biden have called the unthinkable — they’ll gerrymander their way to victory.

Right now, Democrats hold a 19-8 advantage over Republicans in New York’s congressional delegation. What Democrats did was extend their 19-8 congressional advantage to 22-4, and possibly even 23-3, using redistricting techniques. On Sunday, January 30, the state legislature sent its final map to Gov. Kathy Hochul (D). The governor is expected to sign the congressional maps into law for the next ten years.

The gerrymandered map undermines the fake Democratic narratives that they must use legislation to stop GOP-led states from gerrymandering their own states. Their legislative attempts failed at least four times over the last six months in the Senate.

How Bad Do the Districts Look?

Democrats gerrymandered the congressional districts to look like snakes that cross numerous waterways and divide communities. The worst might be a New York City redrawn boundary currently controlled by Rep. Jerry Nadler (D-NY). The new map eats into conservative areas of Rep. Nicole Malliotakis’ (R-NY) district. The new map dilutes her district and puts the GOP in an impossible situation while Nadler’s district remains firmly blue.

Extends from Manhattan’s West Side down into Borough Park in Brooklyn, and takes a pretty windy path to get there pic.twitter.com/xvo9rbHAQR

New York Democrats allege that no one should be surprised at what they did. Apparently, they’re right, because Biden and Pelosi haven’t said a word. Still, redistricting experts say it’s a real problem. Biden won 60% of New York’s vote. Yet, the new congressional map tips the scales even further in favor of the Democrats, with 85% of districts going solid blue.

Looking ahead, there could be a legal battle over the Democrats’ attempt to block out Republicans to help maintain their power in Washington, DC. Regardless, the New York Democrats ultimately undermined Biden and Pelosi’s narrative about GOP-led voter reforms and gerrymandering.