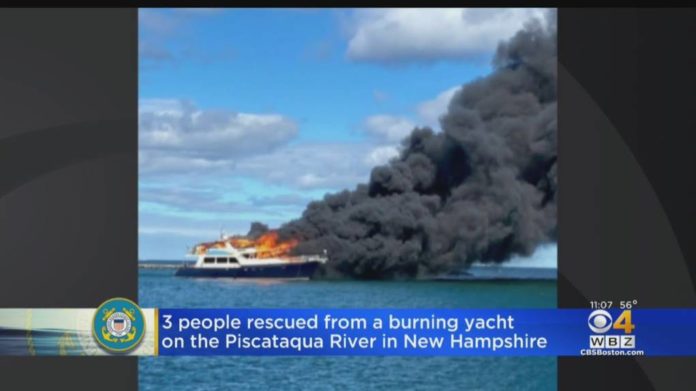 Three people and two dogs were rescued after jumping off a burning yacht in New Hampshire river. The yacht drifted into Maine waters and sank about two hours after the 911 initial call.

The 70-foot yacht burned and sank in New Hampshire River. One of the passengers noticed smoke on board, and soon the entire boat was engulfed in flames. The incident sent three people to the hospital, authorities said.

The three people and two dogs were riding on the yacht. All three people and the two dogs on board were all rescued by several other boats full of Good Samaritan. They were the ones who led the initial rescue until officials arrived on the scene.

The people who were evacuated from the yacht were treated and released from Portsmouth Hospital. Fortunately, none of the victims endured any life-threatening injuries that required extensive treatment.

The boat sank off the coast of Kittery, Maine. Within two hours of the call, the vessel was completely submerged underwater.

Police say that the three passengers and two family dogs jumped overboard as their boat became engulfed in flames. This is where they were rescued by the Good Samaritans that offered a helping hand.

For more information on this story, consider the following news outlets listed below to gain additional details and stay in the know.