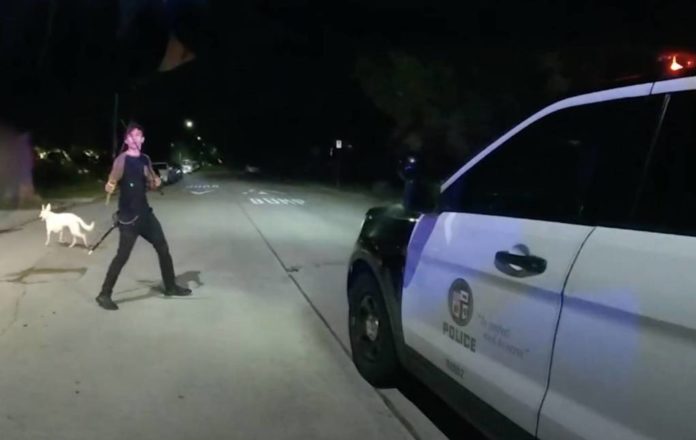 Approximately 11:20 p.m. on October 18, 2022, Wilshire Patrol officers responded to the 1200 block of Victoria Ave for a radio call of an assault with a deadly weapon in progress.

The suspect was armed with a sword. Upon arriving at the scene, the officers observed 23-year-old Eric Herrera walking down the street holding a sword, while holding his hand out towards the police officers. He was given verbal commands by officers who tried to de-escalate the situation by telling Herrera to put the weapon down and try to calm him down.

It seemed that Herrera, who was holding a sword in his hand, refused to comply with the officer’s commands as he approached the officers.

As a result, the officers used a taser as a form of less lethal force to subdue the suspect. As a result, Herrera was taken into custody without any further incident.

A number of lacerations to the arm of the victim (the mother of Herrera) were noted by officers during the incident, as she was suffering from numerous wounds caused by the sword of Herrera.

After rescuing the victim, the officers immediately applied a tourniquet to the injured arm and rendered first aid.

Firefighters from the Los Angeles Fire Department responded to the scene and transported the victim to a local hospital for treatment.

Currently, she is listed in a stable condition. It has been reported that Herrera has been arrested on the charges of Attempted Murder, with a bail of $100,000.