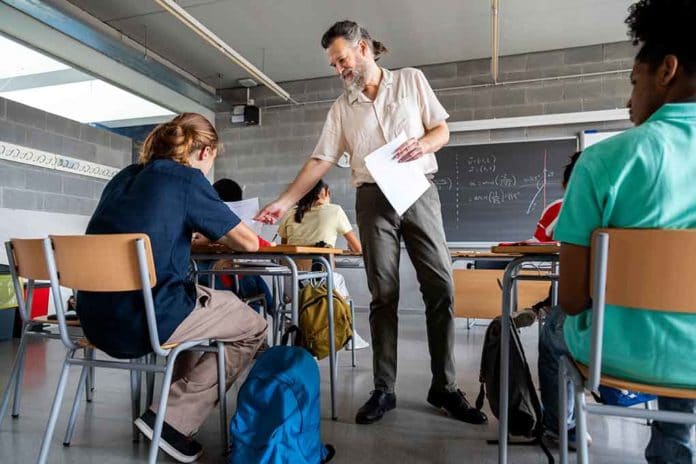 (TheDailyHorn.com) – Americans have been challenged repeatedly by rise of woke culture and growing concerns over the use of critical race theory in public schools. At the same time, controversy over transgender issues and the increasing demands of the LGBTQ+ community have reached a new breaking point. The issue of gender identity recently came to a head with the resolution of a years-old lawsuit.

In 2018, a philosophy professor sued after the college he worked for terminated him for refusing to identify a biological male as a female. Professor Nick Meriwether said he was a devout Christian and believed that people are born with the gender God intended them to have. After trying numerous times to reach a compromise with the student over pronouns, the school forced him to comply despite his religious beliefs. In the end, the professor got a massive payout when school officials recently agreed to settle the case.

Does a Constitutional Guarantee Override a Pronoun?

In January 2018, a student complained to the dean that Professor Meriwether refused to identify him with female pronouns. According to court documents, the school tried to resolve the situation by forcing Meriwether to violate his religious beliefs. The first recommendation by Dean Roberta Millikan was that the professor should refrain from using gender pronouns at all and only refer to students by their last name. The professor said that was impossible.

After the student complained again, Meriwether said he would refer to students by their preferred pronouns so long as they agreed he could include a note in the syllabus that it was under compulsion and against his religious beliefs. At that point, Millikan notified the professor he was under investigation by the university under allegations he was creating a hostile classroom environment.

After Shawnee State University warned Meriwether for refusing to acknowledge a student by a preferred gender pronoun, the professor sued the school for attempting to force him to violate his religious beliefs in violation of the First Amendment. Initially, a US federal district court dismissed the case. In March 2021, the 6th Circuit Court of Appeals subsequently ruled unanimously to remand the case to the lower court for additional consideration on Meriwether’s free speech and free-exercise claims.

Circuit Judge Amul Thapar wrote that the First Amendment was especially relevant to Meriwether’s case because it specifically concerned his core religious beliefs. He added that if a university could force someone to agree with something in violation of their genuine religious beliefs, what would stop school administrators from compelling ideological conformity?

Despite the ruling, the school responded in writing denying that anyone at the school violated the professor’s free speech rights or his right to exercise his faith. The school doubled down, saying it stood behind the student’s right to a discrimination-free education as well as the rights of faculty, visitors, students, and employees to express their beliefs and ideas.