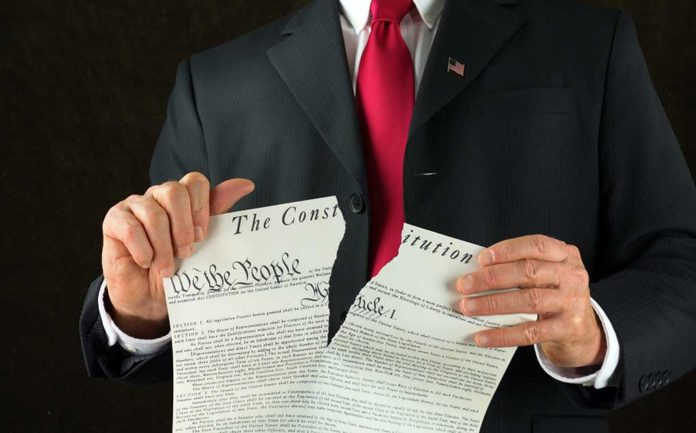 (TheDailyHorn.com) – As America rounds out 2021 and heads into a new year, election season will soon be upon us once again. When many people think about the 2020 election, specific images emerge, especially among conservatives. Fake news, election fraud, and cheating are some of the main topics that weighed on people’s minds after Donald Trump lost to Joe Biden. Whether the allegations were true or not isn’t the issue. The fact is, they defined the election for millions of Americans.

The 2022 midterm elections may see a record turnout. As of the middle of December, President Joe Biden’s approval ratings are among the worst of any president in modern US history at this point in their tenure. From energy to the economy, and from inflation to immigration and education, there isn’t much good news for Democrats. In at least one poll, voters prefer Republicans over Democrats to lead the House and the Senate in 2023.

A new prediction from Saxo Bank offers a bleak picture of the 2022 midterms and suggests the country could face a constitutional crisis after the election. Let’s look at their upcoming election analysis and ask if they are right or wrong.

Saxo Predicts Trouble Ahead, But Are They Right or Wrong?

To arrive at its viewpoint that a constitutional crisis awaits America, Saxo spent considerable time looking back at 2020. The study singles out former President Donald Trump as a conspirator who’s ultimately responsible for the January 6 riot on Capitol Hill. Yet, it didn’t frame the context of what happened on that day or the pent-up conservative frustration after four years of what seemed like hand-to-hand combat with Democrats.

Over Trump’s four years, conservatives were labeled racists, Islamophobes, and other offensive terms, as Democrats ruthlessly harassed the Trump administration. They called for activists to confront Trump officials in what conservatives saw as a form of incitement.

Democrats concocted the Russian hoax and lied about it for years. They impeached the 45th president twice over bogus charges after they couldn’t get Trump removed through the 25th Amendment. Then, to top it off, stories of governors and state election officials breaking election laws to make voting easier during the pandemic led to serious allegations of fraud and cheating.

Saxo concluded that in some way, 2022 will likely become a repeat of 2020. They allege that Republican legislatures in 2021 passed election laws designed to rig elections in their favor by working to suppress the vote and appointing allies to key positions. That’s misleading, however.

GOP-led legislatures designed election reform laws to prevent non-elected officials from adding to the law without legislative input. In other cases, they reformed mail-in voting to make it easier to vote and harder to cheat.

Regarding Democrats, Saxo predicts they will create a fear mongering campaign that will only serve to create more distrust as lobbyists control the Democratic narrative. Really, that’s all they have for Democrats?

Saxo concludes that both sides will contest a handful of races and will try to stop certifying the vote to keep the new Congress from convening on January 3, 2023. Unlike presidential elections, it’s abnormal for Congressional races to become that toxic and overheated after voters speak.

Here’s another prediction, if one wants to look back to see forward. In 2020, House GOP candidates successfully defended every incumbent seat and flipped 16 Democratic ones. Republicans were supposed to lose more than 10 seats. As Biden’s numbers wane and voters see Democrats as the party of inflation, illegal immigration, and identity politics based on critical race theory, voters will likely see the midterm elections as a referendum on the Democratic president and the job moderate Democrats did in 2021.

How’s that for a prediction? Of course, nothing is decided until voters cast a ballot, and anything can change. That’s the beauty of an election.