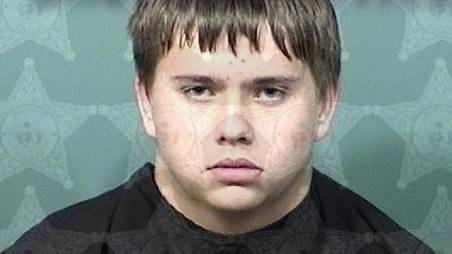 An 18-year-old Florida teen is facing felony charges in adult court after allegedly attempting to kill his mother with a frying pan and pocketknife. The teen complained to his mother that she was “constantly harping” on him about cleaning his room.

Tobias “Toby” Brewer, 17, is accused of attacking his mother Carol Gray, 69, late in November. During the early hours of Nov. 30, police were called to Gray’s residence where they discovered the woman lying on her back near the laundry room, gravely injured.

“The victim was covered in blood and had multiple stab wounds on her body,” according to the probable cause affidavit. In addition, the woman had suffered “blunt force trauma to the face as well as to the back of her head,” according to the affidavit, adding that when police found her, her nose was “almost completely detached.”

A “small black folding knife” and a frying pan with a broken handle “covered in blood” were found next to her.

However, she was not dead.

“As officers were requesting rescue to respond to the scene, the victim took a breath and stated ‘Toby’ did this,” the affidavit stated. The authorities identified “Toby” as Gray’s son, Brewer, and were eventually able to locate him through his cell phone. He led police on a high-speed chase through several communities before crashing his car into a wooded area where he and his girlfriend attempted to flee on foot.

Brewer confessed everything, according to police documents.

“During a sworn audio and video recorded post Miranda interview with the suspect, he admitted to stabbing the victim multiple times with a pocket knife that he carries around,” according to an arrest warrant. “He also advised that he struck the victim in the head until the handle of the frying pan broke, at which time he pulled out his pocket knife and began stabbing her repeatedly.”

The affidavit states that Brewer was “upset” because his mother was constantly bothering him about cleaning his room, explaining that he “doesn’t like cleaning his room” and that he was “tired” of her “constantly harping about it.”

The police were alerted shortly before 2:30 a.m. on Nov. 30 by a woman whose son informed her that “his friend “Toby” killed his mother. Brewer’s friend had walked to Brewer’s house after receiving multiple calls from Brewer. Upon arrival, this friend met a second friend of Brewer’s. According to the witness, loud bangs were heard coming from the rear of the residence.

Brewer’s friend walked to the back of the house and “located the suspect standing over the victim holding a frying pan,” the affidavit said.

According to the witness, Gray was heard to say “Toby Stop.”

Brewer fled in his mother’s car from there, according to police. The suspect’s friends reportedly followed Brewer to the residence of his girlfriend, another teenager. In the end, the cars were separated, and it was not until some time later that Brewer was involved in the “multi-county pursuit” that led to his crash in the woods.

Brewer’s case has been transferred to adult court, according to Brevard County court records. According to his arrest records, he has been charged with attempted murder, criminal conspiracy to commit a capital felony, fleeing with disregard for safety, and grand theft of a motor vehicle.

Records from the Brevard County Sheriff’s Office indicate that Brewer is currently being held on a bond of $17,000. He is scheduled to appear in court on January 11, 2023.

According to the arrest warrant affidavit, Gray was airlifted to a medical facility and was listed in critical but stable condition.