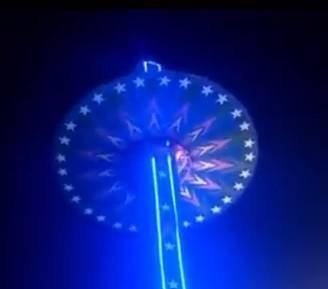 A carnival ride in India plummeted 50 feet to the ground, leaving multiple people injured.  The Hindustan Times reported that the accident happened on Sunday evening during a festival at the Dussehra Ground in Phase-8, Mohali in the Punjab State of India.

According to the report “at least 10 individuals, including five children, were critically injured after a joyride, also known as a drop tower, came crashing down.

The joyride is a circular-shaped ride attached to a tall tower.  Normally the passengers would experience an exhilarating ride up and an exciting but safe ride back down, but unfortunately, that is not what these riders experienced.

In the video you can see the ride adorned with lights, spinning about 50 feet up in the air.  What you assume will be a slow glide down is not what happens at all.  The ride dramatically drops and picks up speed until it crashes on the platform below.  The safety belts were the only thing holding the passengers in.  But watching the video, you can see just how hard they hit the ground.  With their body taking the complete impact.

It was reported that the ride malfunctioned leaving the riders left to free fall from above.

Witnesses to the incident helped the injured to the local hospitals.  There were no ambulances on site.

There are reports that the amusement ride operators fled the scene after the crash.

The ride has since been closed, and an investigation has begun.  No deaths have been reported.