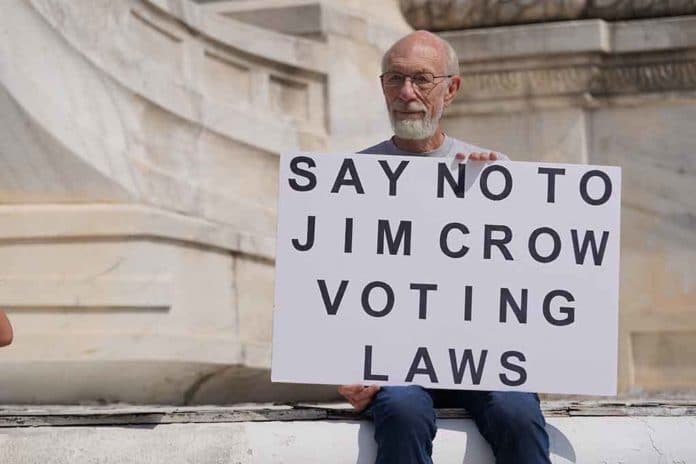 (TheDailyHorn.com) – It takes an incredible amount of bravery for any politician to stand up to their party when one believes it’s wrong and choose principles over party ambitions. On Wednesday evening, Sens. Joe Manchin (D-WV) and Kyrsten Sinema (D-AZ) stuck to their word. They voted against carving out an exception to the filibuster that would have allowed Senate Democrats to pass their controversial election laws without the GOP support. Both Senators argued that the tradition of the filibuster rule dated back to the origins of the Senate and said it was a vital check and balance on the majority, despite agreeing with the Democrat’s election rules legislation.

Tonight will be remembered in history as the night that Joe Manchin, Kyrsten Sinema, and Senate Republicans chose the racist legacy of Jim Crow over delivering voting rights.

Needless to say, the Left was angry when they didn’t get their way. Instead of respecting the two Senators’ views, the far-left squad viciously and vindictively attacked them. Several Democrats alleged that voting against ending the filibuster was akin to white supremacy, racism, and institutional racism.

Far-left Democrats continue to use race about virtually everything. If someone is against them, they’re racist. It’s not working well. Democrats say GOP-led state legislatures passed election reform laws to suppress minority votes.

Yet, that is blatantly false, Georgia, Texas, and Arizona expanded early voting, codified ballot boxes into law, and required identification to cast a ballot. Plus, the Republican states are much more accessible to voters than Democratic-led states in the North East.

The question is, why isn’t the Squad protesting voting rules in New Jersey, New York, Connecticut, and Rhode Island?