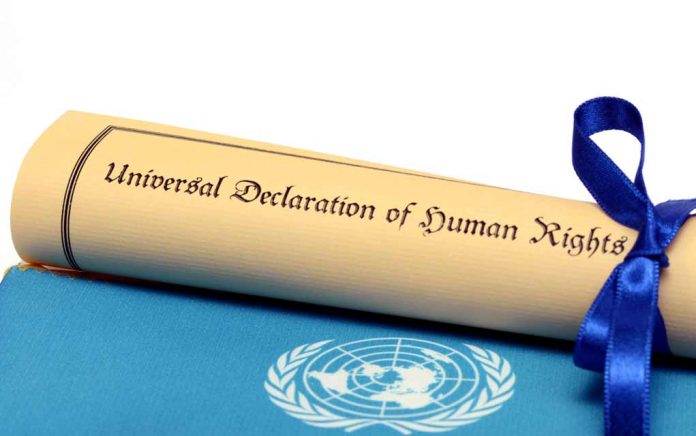 (TheDailyHorn.com) – Experts consider the Universal Declaration of Human Rights (UDHR) the world’s most important foundational document enshrining basic human rights and fundamental freedoms. The United Nations General Assembly adopted the UDHR on December 10, 1948, to reaffirm its commitment to equal rights and the dignity of all humans.

The UDHR includes 30 articles detailing a person’s fundamental, inherent, and inalienable rights regardless of race, gender, religion, nationality, or any other status. Although the UDHR was non-binding, its provision inspired the adoption of nine international human rights treaties.

All of the United Nations member states signed at least one of those human rights treaties and over 80% signed four or more.

The United States has been influential in the development and shaping of international human rights declarations and standards, and the UDHR was no exception to that rule.

Eleanor Roosevelt, wife of then-President Franklin Roosevelt, served as the chairperson of UDHR’s drafting committee and was guided, in part, by her husband’s efforts to protect the “Four Freedoms” — the freedoms of religion and speech, and freedom from want and fear.

The US continues its tradition of support for the UDHR through various mechanisms like its ongoing role as a permanent member of the UN’s Security Council. Additionally, the US has influenced the development of other significant human rights treaties like those protecting the status of refugees, calling on the elimination of racial discrimination and prohibiting torture and other forms of inhumane punishment.

US support for the principles of universal human rights goes back to the founding of the nation. The Declaration of Independence spoke of the “self-evident” truth that “all men are created equal.” The Constitution endowed those inalienable truths through the inclusion of its Bill of Rights.

The US continues its commitment to preserving fundamental human rights through its ongoing support of the UDHR and successive international treaties binding signatories to its tenets.