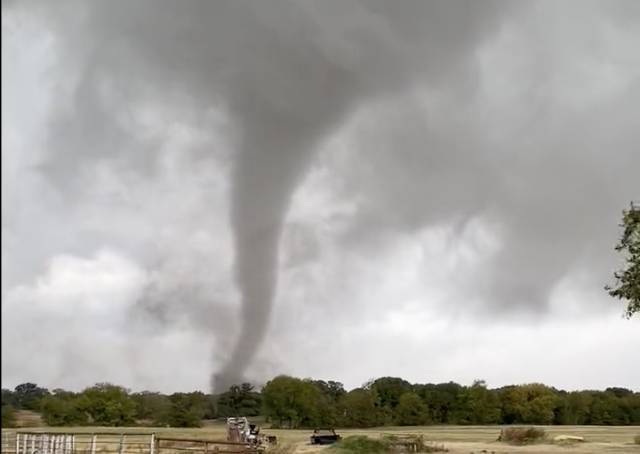 The tornadoes that struck Oklahoma, Texas, and Arkansas late Friday killed one person and left several others missing. It left dozens of homes and buildings damaged and knocked out power for thousands.

According to county emergency manager Cody McDaniel and reported by CNN, McCurtain County, in southeastern Oklahoma, suffered significant storm damage after a tornado hit Idabel, killing one unnamed person. In addition, McDaniel stated that there are “multiple missing people.”

According to McDaniel, authorities were still trying to determine the extent of the damage and injuries; he added, “It’s not good.”

Emergency coordinator for McCurtain County Steven Carter told the Texarkana Gazette, “There was total destruction on the south and east sides of Idabel.”

Oklahoma Governor shared in a tweet, “Praying for Oklahomans impacted by today’s tornadoes.” He added, “Search and rescue teams and generators forwarded to the Idabel area. Will continue to work diligently with the Oklahoma Emergency Management.”

A sheriff’s office in Lamar County, TX, said at least 50 homes had been damaged or destroyed as of Friday night near the Oklahoma border.

As a result of the extensive damage in Lamar County, officials declared a disaster, according to a news release. As of yet, no deaths have been reported.

According to the National Weather Service Storm Center, nine tornadoes were reported in Texas, four in Arkansas, and one in Oklahoma on Friday evening.

According to reports, thousands of homes and businesses were without power throughout Arkansas, Louisiana, southeastern Oklahoma, and eastern Texas on Saturday morning.

In two counties widespread damage was reported due to tornadoes that occurred on the Texas-Oklahoma border.

According to The Weather Channel, a​ truck driver was taken to the hospital when his semi blew over, and a person was hit by a falling tree in southern Oklahoma.

Sebastian County in Arkansas Emergency Management said that 10 homes were damaged in the Mansfield area.

It is estimated that at least four houses were damaged in Hopkins County, TX on Friday, according to the county’s sheriff’s office.  The Salvation Army has been sent to assist families in need.

As reported by CNN, The Choctaw Office of Emergency Management reported that a woman suffering an injury as she was trying to reach a storm shelter when a tree fell on her, Lewis Collins told CNN. There is no information about whether a tornado touched down there.

Governor Abbott urged Texans to listen to emergency officials, he said in a press release, “The State of Texas continues readying resources to protect Texans against severe weather threats impacting our state, and we urge Texans to heed the guidance of their emergency officials to keep themselves and their loved ones safe.”