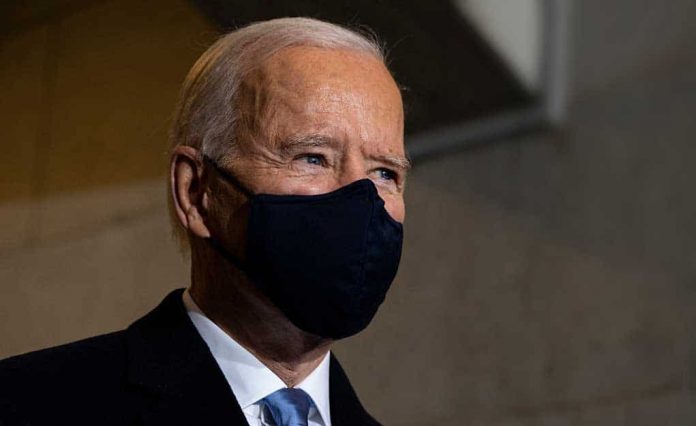 (TheDailyHorn.com) – Throughout 2020, the media and health experts warned that it was essential to practice good hygiene and wash your hands frequently to help combat COVID-19. As America turns the corner in preparation for the holidays and a new year, it seems that those practices are out the window. Yet, vaccination and mask mandates are still a very real thing.

Apparently, President Joe Biden doesn’t believe his own words, or those of his administration officials. On October 18, the president and first lady were caught on video walking through a restaurant without a mask in violation of a Washington, DC, mask order. If that wasn’t bad enough, he also got caught coughing in his hand and then shaking people’s hands at a New Jersey rally.

Carlson uses a rare blend of sarcasm and humor to make points. On Tuesday evening, he reminded his audience that people who make the rules don’t have to follow them. Who’s going to enforce the rules against the President of the United States?

In 2020, Biden said as a presidential candidate that he wouldn’t pursue vaccine mandates. That policy didn’t last long once he became the president. The Occupational Safety and Health Administration (OSHA) expects to issue a workplace vaccination mandate for employers with over 100 workers any day now.

Talking about Biden wandering maskless through the restaurant a few weeks ago, Carlson asked if anyone “would like some of Biden’s saliva with your entree tonight?” It’s the cough in the hand that takes the cake. The popular Fox News host said the cough was akin to “coating his palm with infectious filth” before moving to shake hands with people.

What Happened to Pandemic Fear Mongering?

In April 2020, Dr. Anthony Fauci said that Americans should never again shake hands. He declared the greeting gesture dead and said it should be a relic of the past even after the pandemic. He argued that no one should shake hands as a new “normal.” Fauci stated that not shaking hands would prevent coronavirus from spreading and could even decrease the spread of the flu.

Yet, we now have footage of Biden coughing in his hands after potentially being exposed to COVID-19 just a week earlier. On October 16, Biden stood near Secretary of Homeland Security Secretary Alejandro Mayorkas, who was diagnosed with COVID-19 two days later. As expected, White House Press Secretary Jen Psaki brushed off the incident.

The “it’s okay for thee but not thee” crowd shows once again that the rules only apply to ordinary Americans, not elites. If you don’t follow them, you could lose your job.