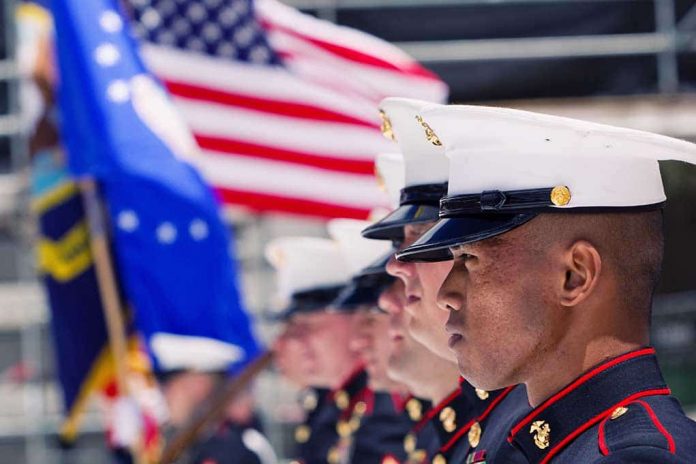 (TheDailyHorn.com) – A decorated Marine who served 17 years in the military is standing up to his superiors over the botched withdrawal operation in Afghanistan. Lt. Col. Stuart Scheller sacrificed his entire military career after an ISIS-K suicide bomber killed 13 US service members on Thursday, August 26. Shortly after the attack, Scheller posted a 45-minute video on Facebook in uniform, ripping into military leadership.

Scheller said he, and others, were upset that their superior officers let them down. Worse still, the colonel said no one accepted any responsibility for the operation, and that didn’t sit well with him. Scheller said he knew one of the men who died in the suicide bomb attack at Kabul’s international airport. As of Monday morning, Scheller’s video had been shared 64,000 times and viewed by more than 811,000 people.

Several of those who served under Scheller praised him for taking a stand. Some said he always did what was right, even when it went against the grain. Others said he was a hero for saying what others were thinking but were afraid to say. Scheller said some of his colleagues were supportive of his video but urged him to remove it. The colonel refused. He encouraged others to “step up” and stated that the military leadership only had power because people allowed it to happen. “What if [everyone] demanded accountability?”

In a separate video, the Combat V for Valor and Bronze Star recipient announced he was resigning from the Marine Corps effective immediately after he was relieved of his command. The Marine Corps stated Sheller was reassigned “due to a loss of trust and confidence in his ability to command.”

Many civilians may not be aware that members of the military do not enjoy the same freedom of speech rights as those in the civilian world. The US Supreme Court has repeatedly ruled that the Doctrine of Military Necessity is vital for obedience and discipline in military life. In 1950, Congress passed the Uniform Code of Military Justice (UCMJ). It limits service members’ rights to free speech.

While many respect what Scheller did, he technically violated the following rules of conduct under the UCMJ:

Scheller acknowledged in his resignation that he would lose three years’ retirement benefits by taking his stand.

It’s unknown how the Marine Corps will handle Scheller moving forward. They could refuse to accept his resignation and pursue a court-martial or other non-judicial punishment.

For now, Scheller’s father says his son won’t comment in the media until he formally leaves the Marines.

This guy is all class. He knew what the consequences would be. His concerns are not wrong. Many people feeling the same lack of accountability. When the dust settles that accountability must happen. https://t.co/bpA79F4Fdi

On Friday, former Navy Seal and current Congressman Rep. Dan Crenshaw tweeted that Scheller is “all class,” and his concerns were not wrong. He added the colonel knew the consequences but demanded accountability anyway.