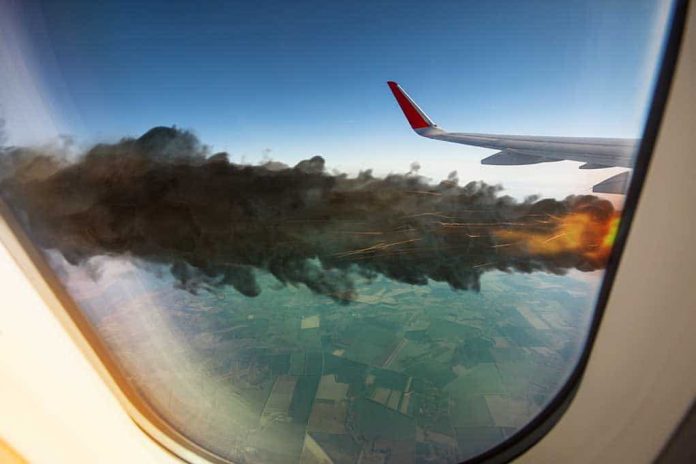 (TheDailyHorn.com) – A United Airlines Boeing 777 with 231 passengers and 10 crew members suffered an engine failure that could have had tragic consequences shortly after takeoff from Denver International Airport. En route to Hawaii, the captain declared a mayday and initiated emergency landing protocols. Large engine parts rained on the ground in a suburb north of Denver, CO.

While shaken up, no one on board was hurt due to the flight crew’s quick and heroic actions. No injuries were reported on the ground either as engine parts landed near homes and on sports fields. The plane managed to land safely with one engine.

A passenger on United 328 took this video of flames shooting out from the engine. Some people told me they said prayers and held their loved ones' hands as they looked out the window. Flight was on its way to Hawaii from Denver. Glad everyone onboard is safe #9News pic.twitter.com/c8TNYlugU2

The video posted on Twitter shows the engine engulfed in flames. While unconfirmed from the National Transportation Safety Board (NTSB), video and still images show a broken fan blade in the engine. In-flight issues like this are rare, but can happen.

Pilots undergo ongoing training to prepare for events like these. At the moment of an engine explosion, they learn to cut off flammable fuels and hydraulic fluids to the engines. Once again, a professional flight crew avoided what could have been a major disaster.