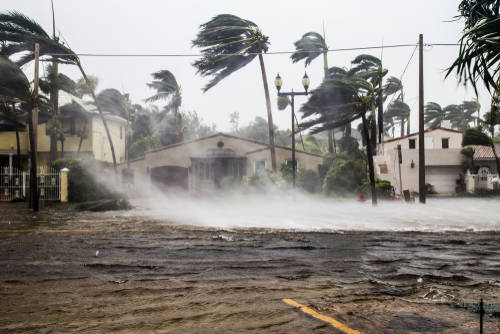 As reported by The Daily Beast, a woman unable to help her husband witnessed the last moments of his life as floodwaters moved in, causing him to drown.

Alice, 72, shared the details with The Daily Beast about how the tragic incident unfolded.

Alice and her husband Jerry, 67, were in their New Smyrna Beach house trying to ride out the storm, they had been put on a waitlist to be rescued by crews using high-water Bearcats. But for Jerry, the rescuers were not fast enough.

Alice shared that “It happened so quick.”

According to the interview, Jerry and Alice were trying to gather their pets and other belongings; the water was knee-level at this point. Jerry was sitting on a stool and somehow slipped, and he fell to the floor and was almost completely emerged in the water.

Alice told The Daily Beast, “I couldn’t get him up; he weighs 250 pounds. So I propped up his head with a pillow.”

Jerry was there for about an hour waiting for paramedics.
The water was relentless, and it continued to rise. The situation became dire. Jerry told Alice, “I’m going to end up drowning!”

Alice tried to reassure Jerry, but shortly after, Alice shared that Jerry “went silent and slipped under the water.”

Once rescuers arrived, The Daily Beast reported that Jerry had been in the water for about 90 minutes. They attempted to revive him but were unsuccessful. Jerry was pronounced dead at the scene.

Sadly, there have been many family members that have lost their loved ones due to Hurricane Ian.  According to reports, more than 77 people have died as of Saturday afternoon from the devastating aftermath of the storm, and many more are still unaccounted for.  As an “extremely dangerous” Category 4 hurricane with sustained winds of 150 mph, Hurricane Ian made landfall on Friday afternoon.

It has caused widespread damage in Florida and has made its way up the Carolinas, causing flooding and extensive damage. Many people are without power, homes have been leveled, and power lines ripped down.

In an address, President Joe Biden said that Hurricane Ian “could be the deadliest hurricane in Florida’s history.”