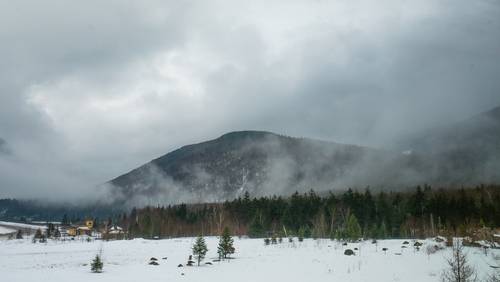 Authorities said a New Hampshire hiker died after he plunged hundreds of feet off a cliff while taking pictures of the area with his wife Saturday morning.

“The hiker’s wife heard her husband yell and looked over to notice him falling over the edge of the mountain down a steep cliff that extended to the bottom approximately 800 feet,” the report said.

The steep and icy summit made it impossible for his wife to reach him. She called 911 for help.

Upon arrival and rappelling down the cliff, rescuers located the hiker about 300 feet below the summit at around 2:30 p.m., the agency said. He was pronounced dead at the scene.

The Mountain Rescue Service lifted the deceased hiker to the summit after extracting him from the cliff face.

Officials say the rescuers arrived at the trailhead parking area at 6:45 p.m. after carrying the body down the mountain.

Until the hiker’s family is notified, officials didn’t release the hiker’s name or other personal information.

Fish and Game said no further information was available at the time.

Mount Willard is located near the town of Hart’s Location in Crawford Notch at an elevation of 2,865 feet.