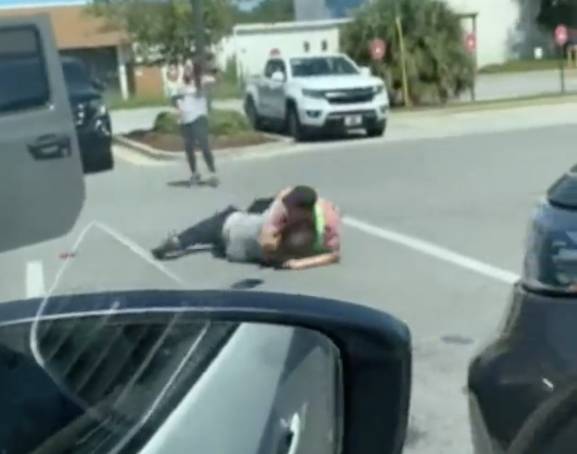 A Chick-fil-A worker rushed to the aid of a woman and baby during an attempted carjacking in Florida. Forty-Three-Year-Old William Branch has been charged with carjacking and battery by the Okaloosa County Sheriff’s Office.

Branch approached the woman as she was getting her baby out of her vehicle at a Chick-fil-A location.  Branch held a stick as he demanded the woman’s keys, according to police.

Branch then helped himself and grabbed the woman’s car keys from her waistband; Branch then opened her car door and hopped inside.

It was reported that the woman then started screaming. Her screams got the Chick-fil-A employee’s attention, who rushed to her aide. The employee then wrestled Branch to the ground. Authorities were called and arrived on the scene where Branch was arrested.

The Okaloosa County Sheriff’s Office tweeted regarding the Chick-fil-A employee, “A major shout-out to this young man for his courage!”

Many others on social media commented as well. One stated, “This hero needs national attention and a reward” another tweeted, “If I’ve said once, I’ve said it a hundred times: Chick-fil-A has the best customer service around.” Another tweet supports him being rewarded, “HIS SELFLESSNESS SHOULD BE REWARDED…. BIG TIME!!!”

More and more carjackings have been in the news and that is for good reason.  According to the National Desk, carjackings and car thefts have increased across the US significantly in recent years. NICB data gives specific numbers showing auto thefts increased by 16.5% nationwide since 2019.

According to police, the Chick-Fil-A employee was punched during the struggle but was not seriously injured.

In reference to the FWB Chick-fil-A employee who ran to help a woman with a baby who was being carjacked, we want to say a sincere thank you to Ms. Kelner for providing video of a portion of the encounter. (see prior post). A major shout-out to this young man for his courage! pic.twitter.com/2Lcwe46azv

For more coverage on this story, check out the additional news sources: