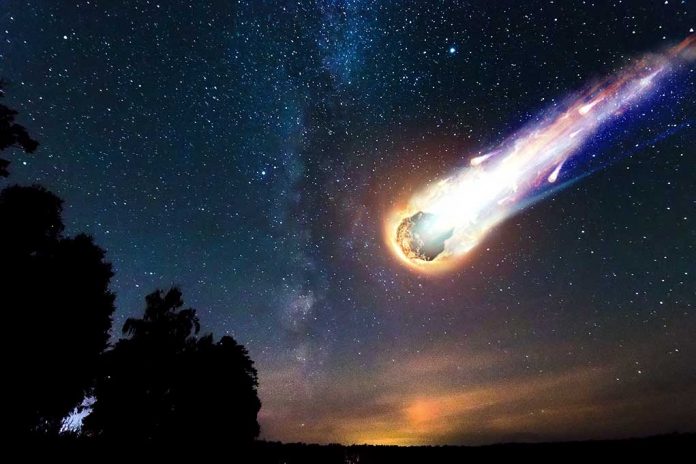 (TheDailyHorn.com) – Every year, around 500 meteorites hit Earth’s surface without causing substantial harm. In fact, most of them fall into the ocean or land in remote areas. You certainly don’t expect a meteorite to end up inches from your head.

Yet, that’s exactly what happened to an Ontario woman recently. Ruth Hamilton was in a deep sleep when she heard her dog barking. Seconds later, she heard an explosion before her face was suddenly covered in debris.

Woman almost killed after meteor crashes onto her pillow 'inches from her head' https://t.co/PO753KsxCA pic.twitter.com/zk1oCwtBMQ

Not knowing what had just happened, she contacted the police. That’s when she looked down and saw a melon-sized meteor on a pillow just inches away from where her head had been, having come through her roof and bedroom ceiling.

Police initially suspected the rock came from a local construction project. However, the crew informed police they had seen a bright light in the sky, accompanied by a loud noise. It was apparent at that point they were dealing with something from space.

Local physics and astronomy professor Peter Brown confirmed the rock was a space object. His team is preparing to research the meteorite to determine what it consists of and perhaps even its origins.

It just goes to show you that there are no guarantees in life, even when you think you’re safe and sound in the comfort of your bed.