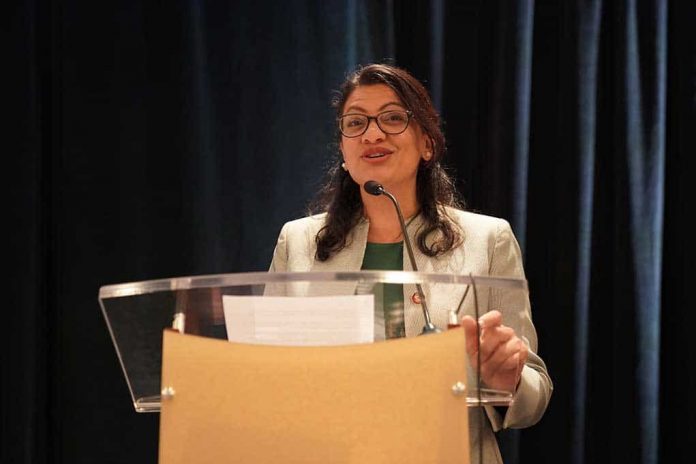 (TheDailyHorn.com) – Israel and Hamas are waging war with one another, and America is largely standing on the sidelines watching. President Joe Biden has expressed support for Israel’s right to defend itself on several occasions. Once again, however, one American Congresswoman is taking exception to the US’s relationship with Israel.

On Monday, May 17, Rep. Rashida Tlaib (D-MI), who is of Palestinian descent, spent eight minutes with President Biden on the airport tarmac in Detroit, arguing with the president over the situation in the Middle East. The Squad member is known to speak ill of Israel and surround herself with those who agree with her assessment of the Jewish state.

Recently, reports started trickling out that Tlaib received praise at a fundraising event from an alleged anti-Semitic Palestinian-American who supported her 2018 campaign. Once again, it appears Tlaib is acting hostile toward Israel.

In March, Maher Abdel-qader and Tlaib raised money together in a virtual fundraiser for Virginia Lieutenant Governor candidate Sam Rasoul. Rasoul is also a Palestinian-American, and Tlaib was the featured speaker of the virtual event. Afterward, Abdel-qader praised the fundraiser and said that Tlaib offered a message of “solidarity.” It’s not clear what he meant by the statement.

Abdel-qader has a history of sharing anti-Semitic posts on social media. In 2018, the controversial activist supported Tlaib’s candidacy for Congress.

In a 2016 Facebook post, Abdel-qader questioned Israel’s right to existence and encouraged people to read something other than “Zionist racist history.” In another Facebook post just months later, he added that “European Jews” didn’t belong in the Middle East and referred to Israel as an “apartheid” state. Before the fundraising event, Abdel-qader posted a comparison between Israel and Nazi Germany on Instagram.

On Monday, Tlaib offered similarly abhorrent views. On Twitter, she referred to Israeli Prime Minister Benjamin Netanyahu as “Apartheid-in-chief Netanyahu” and said he was responsible for committing “war crimes” and violating international law. It’s not the first time she’s accused Israel of being an apartheid state.

In 2019, Tlaib said it wasn’t fair to hold her responsible for someone else’s statements, referring to Abdel-qader. However, Tlaib repeatedly echoes Abdel-qader’s viewpoints, and she confronted President Biden on an airport tarmac over the current conflict. Perhaps Tlaib shares Abdel-qader’s views? After all, he supported candidates like Tlaib for a long time. He is also a supporter of fellow squad member Rep. Ilhan Omar (D-MN).

One thing is certain. There’s no denying the similar use of rhetoric.