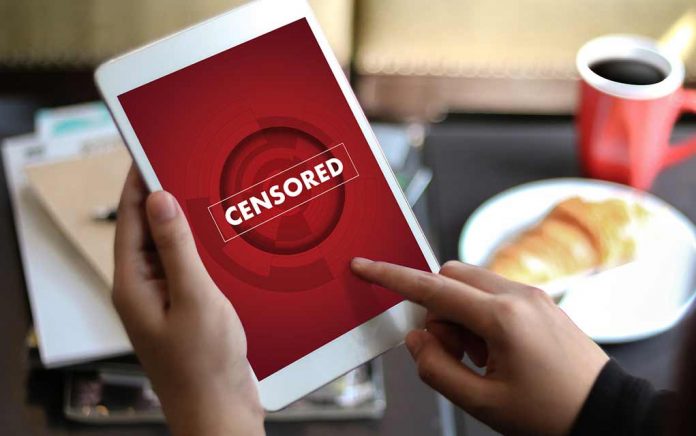 (TheDailyHorn.com) – When the Founding Fathers broke away from the overbearing European monarchies and sailed across the Atlantic, they took a bold new step into something the world had never seen. To that end, they wrote the Declaration of Independence, the Constitution of the United States, and, the first 10 amendments, otherwise known as the Bill of Rights. Among the ideals they enshrined was the free and open exchange of ideas and the notion that no one should be able to quash it.

In those long past days, there was no quick communication, no Internet, no television, just handwritten letters, and speaking face-to-face. Imagine the open space in front of local City Hall or courthouse filled with people who were free to speak their minds about almost any topic. A person could set up a soapbox, climb atop it, and say what they wanted.

Jump forward almost two and a half centuries, and now we have what is purported to be the same idea available to everyone through their phone or computer in the form of platforms like Facebook and Twitter. These companies were supposedly founded upon the same idea as a place where people could freely exchange their thoughts, but that’s not what we got. You see, the Progressive Liberals running those corporations have started censoring ideas that don’t align with their Agenda.

The way people interact with social media has drastically changed since the days of dinosaurs, like MySpace. Many people use it not only to keep in contact with friends and family and to follow the doings of reality stars and influencers, but it’s also the place they go to get their news and information. And this is where the problems start.

In this age, when the country is deeply divided along Conservative/Liberal lines, these sites have started demeaning and sometimes outright deleting posts that don’t align with their Socialist/Communist point of view. Whether it’s about what makes a man a man and a woman a woman, what the actual cause of so-called climate change is, or what the “proper” political leaning is, they are working hard to shut the people on the Right down.

Back in 2017, Twitter management said it wouldn’t be the “arbiter of ‘fake news.’” Yet in 2020, when their CEO decided to mark at least one tweet from President Donald Trump as “needs fact-checking,” things came to a head. Senator Marco Rubio (R-FL) pointed out that their actions may have changed their status from just a mere conduit for commentary to an editorial-styled site that should be held to higher standards, no different from the New York Times or USA Today.

But if they have now decided to exercise an editorial role like a publisher then they should no longer be shielded from liability & treated as publishers under the law.

The internet has changed the way the world seeks its news and information, and the social media giants have encouraged it. So the question becomes: when does a company cross the line from a completely private entity free from government oversight to one governed by the same laws as traditional media outlets? Especially with these companies where management pushed the transition?