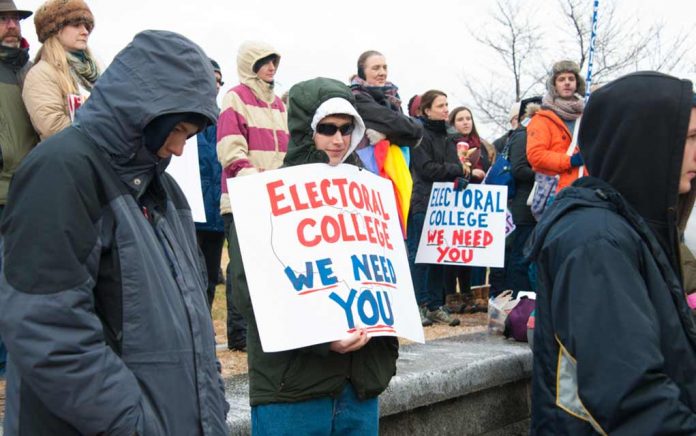 (TheDailyHorn.com) – Critics of the Electoral College like to say that it is nothing more than a dusty relic of an era long gone. They argue that the institution is no longer necessary and that it could undermine our very democracy by ushering in a minority president.

First of all, it’s very rare for the Electoral College and the popular vote to choose different candidates. For more than 100 years, it only happened twice: once in 2000, when George Bush lost the popular vote narrowly to Al Gore, and again in 2016 when Donald Trump received nearly three million fewer votes than Hillary Clinton.

What the Founding Fathers Wanted

The fact that Bush and Trump both became president without a plurality of the vote shows that the US is following both the letter and spirit of the Constitution.

Our founding laws are crystal clear on this subject: the winner of the Electoral College becomes president. The United States of America has never been a pure democracy. To assume so indicates a misunderstanding of our Constitution.

James Madison’s Federalist No. 10 shows us that the founding fathers created a republic, not a true democracy. They understood that the ultimate basis of government was the consent of the governed. However, they rejected the idea that consent could be reduced to a simple majority rule.

The truth is, nothing could go against the spirit of American constitutionalism more than equating democracy with the pure will of the people.

You can think of it like this. The Constitution places limits on all unchecked power. That includes the unrefined will of the people.

As Madison noted, these separations of power provide a “double security” for people’s rights.

Why a Republic Is So Important

California has a population of over 33 million. Montana’s population is 883,000. But both of them get the same number of Senators. If we abolished the Electoral College, we would have to get rid of the Senate too. How crazy does that sound?

You also have to think of the implications of choosing a president by a popular vote. If we did that, we would see elections being dominated by the most populated areas of the country or by a few large metropolitan regions. Do we really want the presidency to be decided by just New York and California?

If we did that, sparsely populated regions of the country would be ignored altogether. We would have to write off whole parts of the US.

The Electoral College is the answer to regionalism because it forces presidential candidates to campaign throughout the entire country. It ensures that no state is left behind. It also creates a more cohesive union.

The Electoral College allows for every state to count in presidential elections. This is an important aspect of our federalist system.

Throughout our history, federalism has been central to our ideals of restraining power.

The bottom line is that if the founding fathers wanted to create a pure democracy, that’s what they would’ve done. But they came up with a better way, and that includes the Electoral College.

There will always be people who want the Electoral College abolished. They can try, but it will mean an amendment to the Constitution, which is highly unlikely. If they ever were to succeed, it would mean taking the United States away from the genius of the Founders’ vision of a constitutional republic.