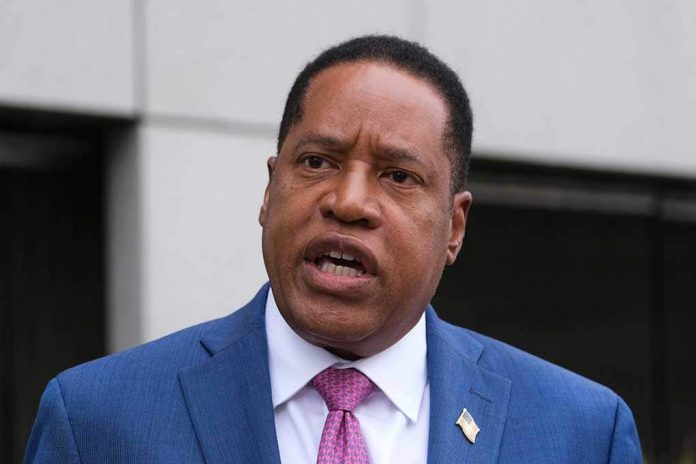 (TheDailyHorn.com) – Where is the outrage when the left directs political violence towards Republicans? On Wednesday, September 8, California Republican gubernatorial candidate Larry Elder and his detail endured vicious protestors.

As Elder launched his Recall Express Tour in Los Angeles, several individuals participated in violent behavior. They harassed, punched, and verbally threatened the candidate and his staff. One even threw an egg at Elder.

Today I kicked off the Recall Express bus tour. Before we even left Los Angeles, my security detail was physically assaulted, shot with a pellet gun, and hit with projectiles. The intolerant left will not stop us. We will recall Gavin Newsom. We will save California.

A white woman involved in the violent protest wore a black gorilla mask, threw eggs, punched one man, and directed vile insults at the gubernatorial candidate. Another man hit a member of the candidate’s team as he yelled profanities.

Elder is seeking to become the first black governor of California. Many conservatives questioned if the violent act was a hate crime under California law and called for an investigation. While Democratic liberals accuse the GOP of racism, was this an example of discrimination from the Left?

Where is the media? The press barely reported it. If Elder were a Democrat, the nation would likely be in a state of uproar. The Los Angeles Times merely referred to the event as a “hostile reception.”

California Democratic Gov. Gavin Newsom isn’t speaking up about the reprehensible behavior either. Elder is a genuine threat to the governor in the upcoming recall election, but that shouldn’t prevent Newsom from being a decent person.

Voters will cast their ballots on Tuesday, September 14.