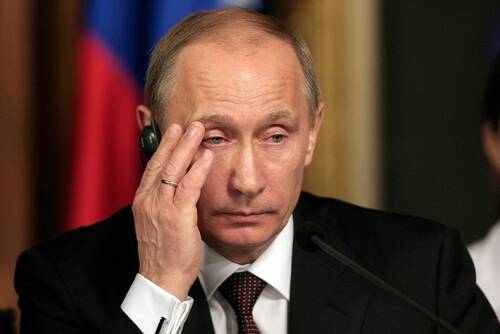 It has been reported that Vladimir Putin has been receiving Western treatment for his cancer so he may continue to direct his troops in the Ukraine conflict.

The Russian leader is said to be battling prostate cancer, pancreatic cancer, and Parkinson’s disease. He turned 70 years old more than two months ago.

President Putin’s supposed health struggles have dominated his public appearances, with him at times uncontrollably shaking, twitching, and fidgeting.

The Russian historian and analyst Valery Solovey believes that Western medicine is being used to slow the spread of cancer and prolong the life of President Putin.

“I can say that without (foreign) treatment he would definitely not have been in the public life in the Russian Federation,” he told Ukrainian media.

“He uses the most advance treatments (and) target therapy which Russian cannot provide him with.”

According to Mr. Solovey, the medical care President Putin has received is not available in Russia, and the treatment has been “too successful”.

However, he noted that “the end is already in sight, even according to the doctors who are curating this treatment” as medicine is able to help only for a limited period of time.

In an email leaked in November, Kremlin sources reported that the Russian strongman had Parkinson’s disease and that he was battling two types of cancer.

An insider with knowledge of the security services stated that the health battle would be denied in “every potential way” and hidden, according to The Sun’s review of the messages.

“Putin is regularly stuffed with all kinds of heavy steroids and innovative painkilling injections to stop the spread of pancreatic cancer,” according to the source.

“It not only causes a lot of pain, Putin has a state of puffiness of the face and other side effects – including memory lapses.”

As well, it was reported earlier this month that the Russian leader had fallen down a flight of stairs and soiled himself, a claim his office argued was “completely untrue”.

According to Mr Solovey, 2023 is likely to be President Putin’s last year in office before he voluntarily steps down or is forced to step down.

The likely successor was suggested to be little-known Russian Agriculture Minister Dmitry Patrushev, 45, the son of Nikolai Patrushev, his trusted security aide.

“Yes, it will. On top of that, it might happen as soon as the spring,” stated the historian and analyst on YouTube.

“Putin is now having his last chance, I would say.

“If he doesn’t make use of it, the elites will not only turn away from him for good… they will turn into action.”

A new interview by the Russian strongman stated that he was “ready to negotiate” with all parties regarding potential “solutions” to the Ukraine war.

“We are ready to negotiate with everyone involved about acceptable solutions, but that is up to them – we are not the ones refusing to negotiate, they are,” he said in an interview aired on Rossiya 1 state television on Christmas Day.

As the Russian leader believed that the United States was trying to split Moscow apart, he doubled down on his decision to invade the neighbouring country.