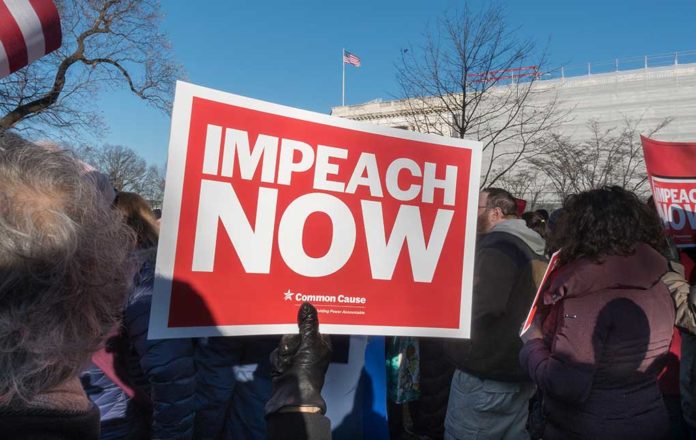 (TheDailyHorn.com) – In August 2021, President Joe Biden’s approval ratings started falling dramatically. The White House said the president’s dropping poll numbers were temporary and unexpected. As it transpired, they’ve been anything but temporary. The Afghanistan debacle left a lasting negative impression and inflation has skyrocketed under Biden’s leadership. America could also face a severe recession within the next year, and the president’s divisive tone since entering the White House has contrasted with his campaign rhetoric of becoming a great uniter.

Do you support impeaching Biden? By party:

Now, it appears that many voters have seen enough, according to a Rasmussen poll released on Monday, January 31. The survey found that 50% of likely voters support impeaching President Biden, including 33% who strongly support impeachment. Forty-five percent oppose it.

This comes as Biden’s approval ratings continue to drop to near-record lows. In one recent poll, barely a third of Democrats said they want Biden to run for re-election. They might find themselves disappointed since Biden continues to say that he and Vice President Kamala Harris will run again in 2024.

Biden also remains in big trouble with independents. They have pulled their support for the embattled president in virtually every poll, contributing heavily to his flailing approval ratings. Without support from independent voters, it’s virtually impossible to win a national office.

Could Biden turn things around? It’s only the end of his first year in office. Still, if he continues to divide Americans and pursue a mandate not given to him by voters, it will be a real threat to Democrats’ future electoral prospects.