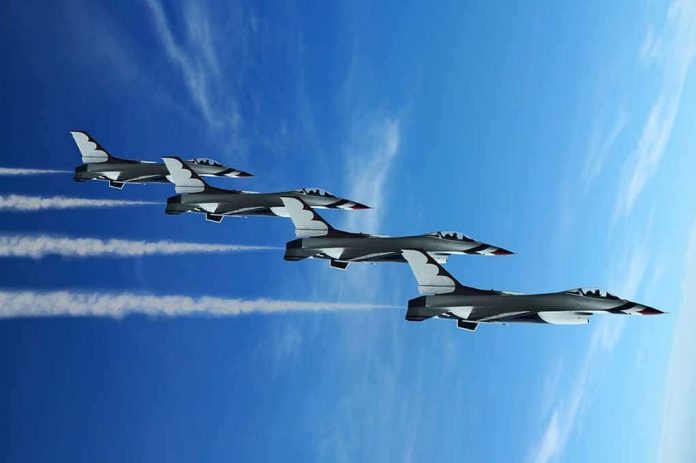 (TheDailyHorn.com) – The Russian Navy got a little too close for comfort off the coast of Hawaii shortly before President Joe Biden’s summit with Russian President Vladimir Putin. On Sunday, June 13, air traffic controllers requested an “irregular air patrol” by the US Air Force. The military launched two F-22 Raptor fighter jets from Joint Base Pearl Harbor-Hickam at approximately 4 pm. One hour later, the Air Force launched a third. The FAA wouldn’t state why they requested the military air patrol.

It appears the odd request was necessary because of the Russian Navy. Russian vessels were conducting military drills 300 to 500 miles west of Hawaii. Russian media said the maritime exercises involved up to “20 surface combatants, submarines and support vessels.” Additionally, 20 aircraft, including Russian long-range bombers, were also involved.

During the Cold War, it wasn’t uncommon for the Soviet Union to conduct military drills near American territories or coasts. Nor was it unusual for the US military to do the same. Until recently, there were few, if any, potentially severe threats made by either country toward the other.

The military exercise off the coast of Hawaii was the largest by Russian forces in the Pacific Ocean since the Cold War. US Officials said the F-22s were scrambled in response to the bomber flights. Fortunately, the Russian bombers did not enter unauthorized territories and were never intercepted or engaged with the military jets.

The aircraft carrier strike group led by the USS Vinson was due to conduct certification exercises to the west of Hawaii. Owing to the Russian Navy’s proximity to Hawaii, the Department of Defense (DOD) moved the strike group within 200 miles of Hawaii’s shores as a safety precaution.

Biden to Address Issue with Putin

On Monday, President Biden told NATO leaders he would be addressing Russia’s behavior with President Putin. The US President said he is not looking for conflict with Russia. However, if Russia continues to act in a threatening manner, Biden said he would respond to protect the Transatlantic Alliance.

Last spring, the DOD demanded that Russia be more transparent about its movements. Russia’s apparent development of its military forces on the Ukrainian border had created concerns. However, in late April, Russia reduced the number of troops in the area and said the buildup had been for a training exercise.

Whatever Russia is up to, there’s little question its military is more active and engaged than it has been over the last several decades.