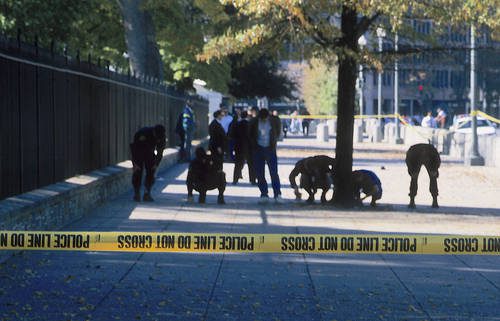 Just hearing the word “serial killer” puts people on edge.  There is nothing more frightful than learning that someone is lurking around and killing people in your community.  An entire town on the west coast is dealing with the news that they may have a serial killer on the loose.

Police have reported that they have connected five unprovoked killings in Stockton, California to one suspect.  Police recently released an image of the person of interest. According to CBS News Stockton Police Chief Stanley McFadden confirmed that the homicides meet the definition of “serial killer.”

The first of the five murders occurred on July 8, and authorities are continuing their search for the person of interest. According to police, all of the victims were men and were alone when they were shot dead.

According to ABC News, none of the victims were robbed or connected with drugs or gangs, they were all ambushed. ABC News reported that police have physical evidence connecting all five crime scenes.

Paul Alexander Yaw, 35 was the first victim.  He was shot right after midnight on July 8 at a park in the 5600 block of Kermit Lane, police said. One neighbor stated to KCRA 3 that she heard the gunshots.

The second victim, Salvador William Dubedy Jr. was shot in a parking lot on Aug. 11.  Family confirmed the death to KCRA 3. He died at the scene, only five minutes away from the first homicide.

Lorenzo Lopez was the fifth victim, he was shot on Sept. 27, the family confirmed to news outlets. His family is hopeful that the Stockton Police Department’s announcement of reward money will make a difference.

In connection with the murder of Lorenzo Lopez and the other four that are believed to be part of the serial killing spree, the Stockton Police Department is offering reward money and searching for a person of interest.

According to McFadden, the victims of these homicides were predominantly Hispanic, but there is no indication that they are hate crimes.

Police are issuing caution to avoid isolated areas and to travel in well-lit areas and travel with a friend. If you have any information call 209-937-8167.

For more information on this story, see the additional news sources below: