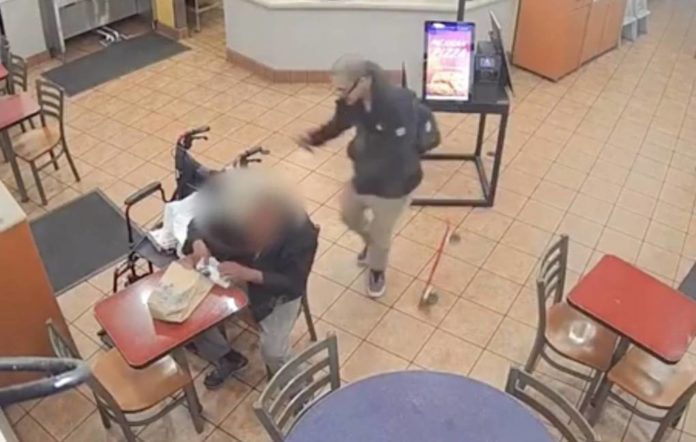 In Los Angeles California an 82-year-old disabled man was savagely stabbed in an unprovoked attack at a local Taco Bell restaurant. According to the Los Angeles police, the violent attack happened shortly before 7 p.m. on Oct. 3 in the Mar Vista neighborhood.

The brutal act was all captured on surveillance video that was just released.  You can see the suspect with a red skateboard and weapon in his hands as he enters the business.

The elderly man was sitting at a table in the Taco Bell, eating his food, as the suspect approached him from behind. In a matter of seconds, the suspect viciously attacks the elderly man. The LAPD reported that he stabbed the disabled man twice, once in the neck and once in the shoulder.  According to the police, the suspect then fled the store on foot towards Inglewood Avenue.

The elderly man suffered severe injuries and was rushed to a nearby hospital. The police reported that he was in stable condition and recovering.

As seen in the video, the attacker is wearing glasses, a black jacket, tan pants, and a black backpack. Police describe the suspect as a bald man between the ages of 20 and 30, he is between 5 feet 1 and 5 feet 6 inches tall, and weighs about 130 pounds. He has multiple tattoos, including one near his left eye and one on the back of his head.

The suspect has not been apprehended and an appeal was issued for the public’s help in finding the stabbing suspect. LAPD is asking anyone with information about the attack to call 310-482-6369.