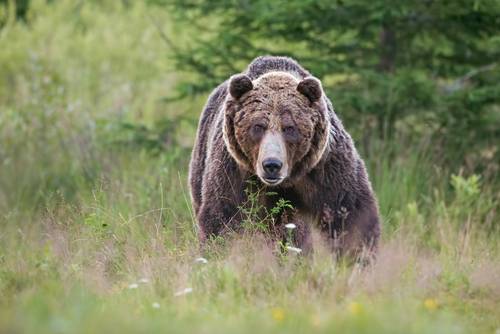 Grizzly bears have attacked hunters twice in the last week in west-central Wyoming, officials said. The second attack occurred when a hunter accidentally shot himself while defending himself.

Following the encounter on Friday, Sublette County Sheriff’s Office said Lee Francis, 65, of Evanston, was taken to the University of Utah Health hospital for treatment. According to a hospital spokesperson, Sue Winchester, she was not allowed to release any information about Francis’ condition.

On Friday evening, Francis was hunting with his son in an area south of Grand Teton National Park when he was attacked by a bear. Francis fired several rounds from his handgun, causing the bear to run away, but one of them hit him in the lower leg.

A satellite phone was used by his son to call for help just before 6 p.m., then he began to administer first aid. The son helped his father onto the horse and they headed toward a nearby lake to meet rescue crews. Eventually, Francis was flown to a hospital by helicopter, according to the sheriff’s office.

According to Sgt. Travis Bingham with the Sublette County Sheriff’s Office, wildlife officials have not located the grizzly bear. The Game and Fish Department plans to search for the bear again on Monday, weather permitting, because it was snowing.

Sheriff’s officials say Wyoming Game and Fish has also been notified, and game wardens are investigating.

It was the second mauling in a week involving grizzly bears in Wyoming.

A grizzly bear attacked two NW College wrestlers while they were looking for antlers shed by deer and elk in Cody area on Oct. 15.

After kicking and kicking the bear, Kendell Cummings threw rocks at it before pulling on its ear to get it to stop. Despite this, the bear turned its fury on Cummings, attacking him twice. In a social media post, Cummings’ father said his son underwent several hours of surgery and ended up with about 60 staples in his head and hundreds of stitches.

“It was horrific. The boys exhibited courage that people can’t even imagine,” head wrestling coach Jim Zeigler told KTVQ. “They do love each other and we communicate constantly through group text and one of the things I always say to them is, you know, thank you for loving each other, and it paid [off]. “